Behold, the Lamborghini Egoista, a new wild supercar to mark their Lamborghini’s 50th anniversary. This is the ‘Maddest Bull Ever’

Behold, something that could only have been dreamt up by someone with a mild obsession with fighter jets and a wardrobe full of straightjackets. Lamborghini is a car company renowned for being a bit, well, completely insane. And what you see here is their latest creation, the Egoista, a fiftieth anniversary present to themselves.

It only has one seat, so buy one if you’re a bit selfish, or Batman. No really, the name ‘Egoista’ roughly translated into English means ‘selfish’.

The Egoista has many, many, madly creased body panels, a pair of red and green lights pinched from Boeings parts bin, some flaps on the back to presumably aid takeoff, a pair of gargantuan exhaust pipes which have been tastefully decorated with bright red LEDs to mimic fighter jet after burners – they probably shoot blue flames, too – and the orange wheels were styled by a five year old. It’s all totally nuts. 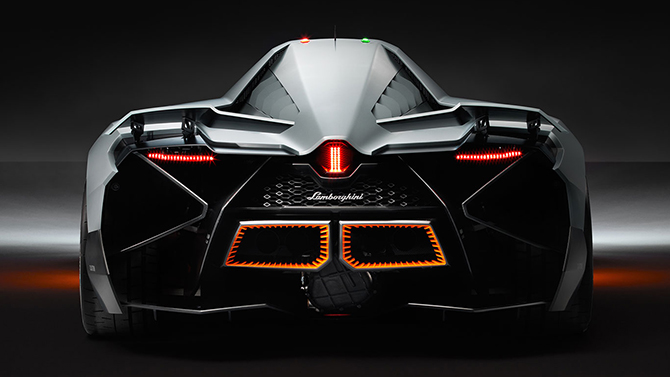 Mounted in the middle is the 5.2liter V10 engine from the Gallardo, which has been pumped up to produce a handy 600hp in this one-off car. Perhaps the Egoistas chassis and engine has been a bit of a test bed for the upcoming Gallardo replacement. With the McLaren 12C delivering 620hp and the Ferrari 458 producing 560hp, the Gallardo replacement with 600hp would slot nicely in between power wise. 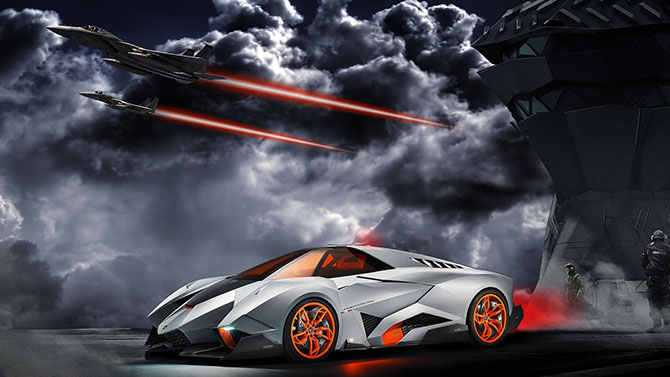 Lamborghini says the Egoistas design inspiration came from the Apache attack helicopter, which is cool I suppose. According to the cars designer, Walter De Silva (he’s a bit mad, obviously) “This is a car designed purely for hyper-sophisticated people who want only the most extreme and special things in the world”. “It represents hedonism taken to the extreme, it is a car without compromises, in a word: egoista (selfish)” he says. This is a man, whose mood room, is filled mostly with Hot Wheels and model planes, probably. 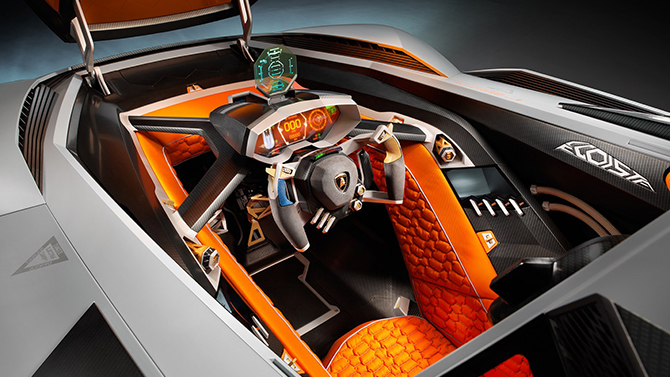 The cockpit as you can see is the coolest ever to be fitted to any *car, (can you call it a car?) mainly because its taken straight from a fighter plane of the future. There’s a ruddy reflector sight for Pete’s sake! This we can only presume is used for shooting at motorway clogging badies (caravans). And look at that steering wheel! There’s buttons and switches all over it, one of them surely fires the missiles. 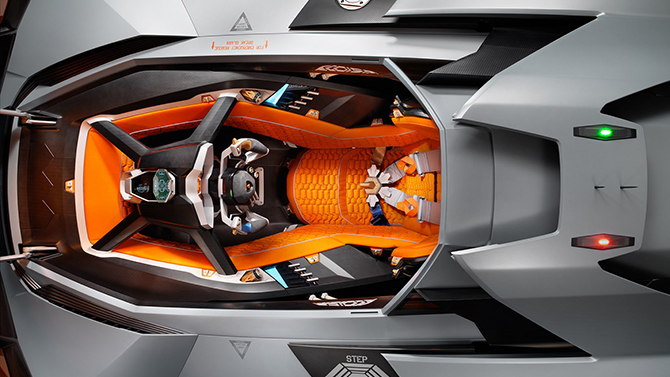 How one folds them self into such a cockpit is however, unknown. But once inside says De Silva it “represents a sort of survival cell, allowing the driver to isolate and protect themselves from external elements”. We’re not exactly sure what ‘external elements’ he means exactly, but things like quickly approaching missiles, enemy aircraft and Jokers seem appropriate. 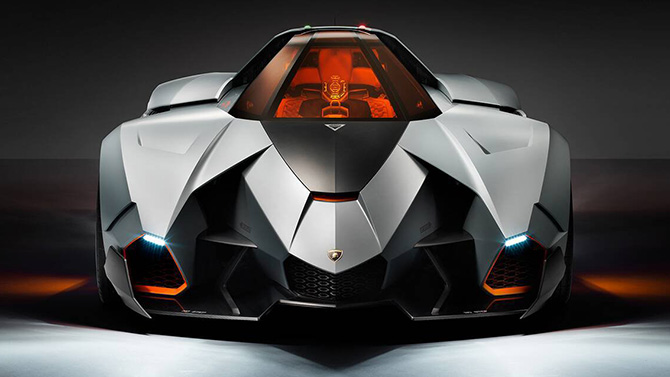 According to Mr. De Silva the car was also designed to look like a nasty bull with its head down chomping on some greenery – not really, it’s charging apparently. De Silva also went on to say “Two white front lights, two red rear lights, a red flashing light in the upper part of the tail, two orange bull’s eyes as side markers, and a further two lights on the roof, red on the left and green on the right, make this four-wheeled UFO unique even in the dark”. The Egoista, then, is a car that allegedly looks like an Apache helicopter, an angry bull, and a UFO – right. 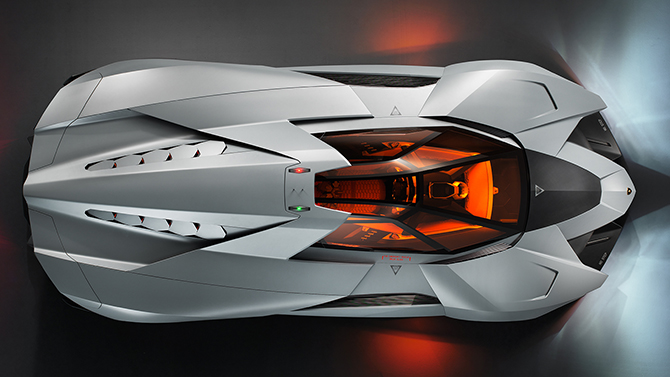 For the cars reveal at Lamborghinis fiftieth anniversary dinner over the weekend, the venues stage was sort of turned into a runway… There was a ground crew waving flashing light rods about to guide Lamborghini CEO Stephan Winkelmann onto the stage as if he was landing a fighter jet on an aircraft carrier out in the pacific – blimey!

After some careful ponderistaion we’ve decided that we like this one-off Lambo much more than the Veneno shown at the Geneva Motor Show, because it does look unbelievably cool. We’d most certainly go there. But, no matter how much you stomp your feet and toss money about, you can’t have it because Lamborghini are keeping it to themselves. According to the mad people from Sant Agata Bolognese “The Egoista is pure emotion, Never Never Land (translation, anyone?), which no one can ever possess, and which will always remain a dream, for everyone.” – damn.

What do you think of Lamborghinis latest and probably maddest creation ever, Carhooters? Let us know by leaving a comment below or tweeting us @CarhootsUK!