Another day, another new BMW model and we have  images, videos, specs, and pricing details for the highly anticipated BMW 4 Series Coupe.

This car says BMW, heralds the dawn of a new coupe era at BMW. Because it is of course called the 4 Series, which doesn’t quite roll off the tongue as nicely as say, something logical, revered and iconic like 3 Series, what was wrong with ‘3 Series Coupe’? Well, apparently some people who may be slightly erm, un-intelligent got confused because the 6 Series isn’t called the ‘5 Series Coupe’. Apparently these people were literally brought to stuttering, dribbling piles of jelly after trying to fathom BMW’s model lineup. Anyhow, the 4 Series is here, and it looks rather tasty. 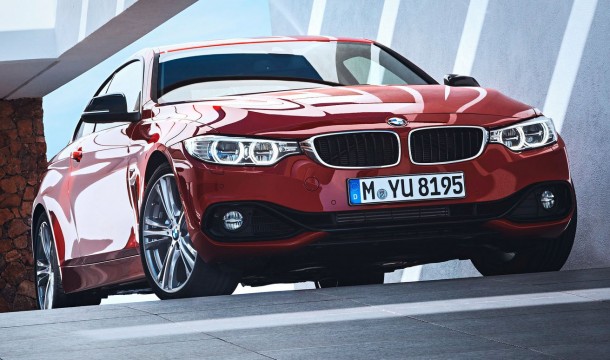 Its face is similar to that of the 3 Series sedan and features the same connected headlight design, except here it’s more excitable with its smiling air dam. It’s a happy car that apparently, is “keen to display its family ties with the BMW 3 Series”. It might share styling cues (and a basic chassis, more on that later) with the 3 Series but it is in fact entirely unique, except for maybe the wing mirrors and the door handles, and the shark fin radio antenna and the entire interior. OK, so it shares a few basic components with its 3 Series cousin. 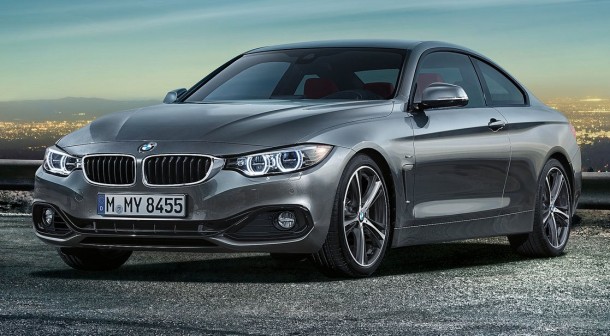 But in its side profile, the 4 Series looks more like a 6 Series than a 3 Series with its long bonnet (or hood, you American), rear set passenger compartment, powerful character line and long, flowing roofline. The 4 Series also receives an ‘Air Breather’ behind the each of the front wheels, which apparently improves airflow in the wheel arches to aid efficiency. But really, it just looks damn cool, especially when it’s painted black in the Sport-line and M Sport trim levels. 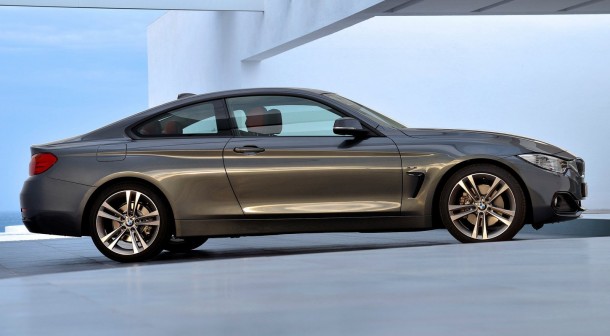 Around the back it’s pretty typical BMW, the taillights are very similar to those fitted to the 3 Series, but the 4 Series looks slightly more dynamically focused and hunkered down. The plumpish rear bumper and wheel arches combined with a 10mm lower ride height give the 4 Series quite an aggressive aesthetic – we like. It almost has an old school muscle car look to it with that stubby boot lid and long bonnet. 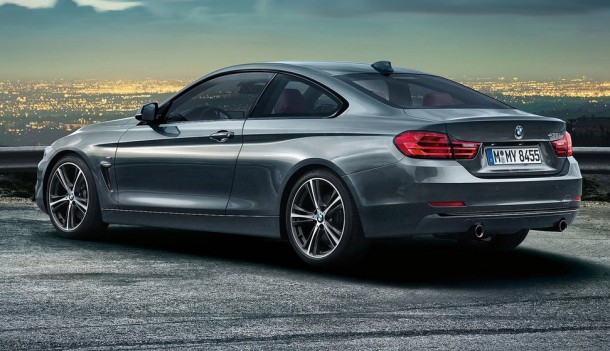 The interior is virtually identical to that of the 3 Series sedan, which is quite a good thing, because the driving position and feel of that interior is superb. 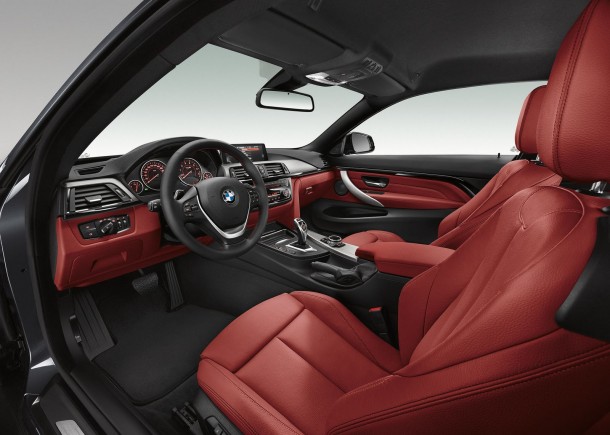 There are four trim lines to select from which alter the exterior and interior appearance of the car. Starting with Modern-line, which makes everything very beige inside. Then Luxury-line which makes everything brown inside. Sport-line gives black interior trim with flashes of whatever exterior color you choose splashed across the dashboard plus some satin black flourishes outside and larger wheels. Finally there’s the M-Sport trim level which comes with the usual aggressive front and rear bumpers, sportier seats and steering wheel, stiffer springs and dampers, plus M Sport wheels and brakes. 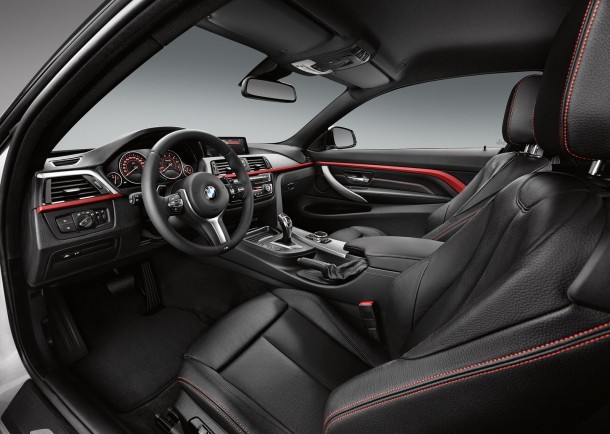 The 4 Series is based on the 3 Series’ wonderful rear drive chassis with a perfect 50:50 weight distribution. However, the front and rear tracks have been widened slightly to compensate for the 4 Series extra 14mm of overall width. The lowered ride height has also allowed the 4 Series’ center of gravity to dip below 500mm from the deck, giving it the lowest center of gravity of any current BMW product. Imagine explaining that to a girl on the first date, you’d be right in there. Extra bracing up front and bespoke spring and damper rates at each corner give the 4 Series a touch of extra precision and agility compared to the 3 Series, apparently. The 4 Series also weighs up to 45kg – about one American toddler – less than the outgoing 3 Series coupe which it replaces. It all sounds (and looks) jolly good. Here BMW, have a biscuit. 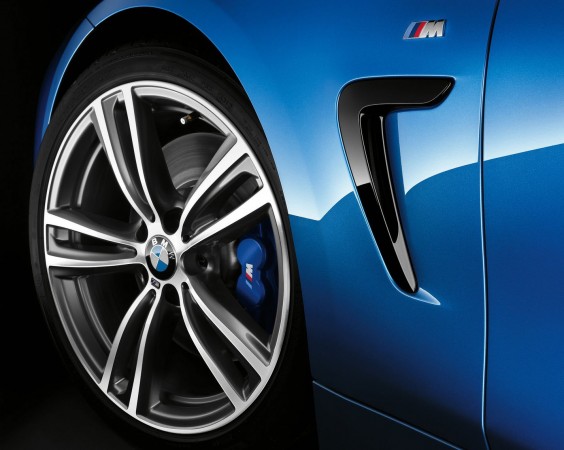 Engine options are more predictable than the Fast and Furious 6 plot with BMW offering three engines initially. Prepare to be bombarded by some numbers. The base model 420d musters up 184hp and 280lb ft of torque from its 2.0liter diesel engine and takes 7.5 seconds to reach 62mph, but will also deliver a mind-blowing 60mpg if you drive it like a pensioner. The 428i is powered by a 245hp 258lb ft 2.0liter petrol turbo four-cylinder engine and hits 62mph in a very respectable 5.9 seconds, whilst delivering 42mpg. The ‘elite athlete’ of the group is the 435i which is powered by BMWs wonderful 3.0liter turbo six producing 306hp and 295lb ft of torque, enough to send the slinky coupe to 62mph in 5.4 seconds in rear wheel drive format. OR 4.9 seconds when equipped with BMWs xDrive all-wheel-drive system. The 435i will very nearly do 35mpg as well, unless you’re making it sing to 7000rpm in every gear, then it er, won’t. 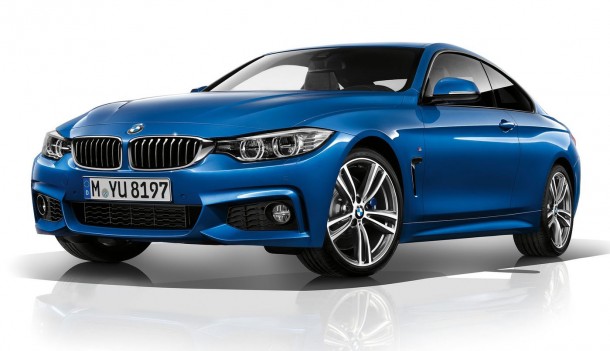 All engines are hooked up to a six-speed manual or an optional and brilliant eight-speed automatic gearbox with steering wheel mounted paddle shifters.

Shortly after launch BMW will add approximately one billion (five) extra models to the 4 Series lineup, which is probably far too many if we’re honest. Remember how people got confused over the 3 Series Coupe? Those same people are going to faint when they realize how many choices they have to make when ordering a 4 Series! Anyway, the additional models are the 184hp 420i, the 430d with 258hp and many, many torques (413lb ft), and the monumentally powerful, xDrive only 435d with 313hp and 465lb ft of torque. The 435d says BMW, will “set the pace in the world of sporty diesel engines” – nice. A 420d xDrive and 428i xDrive will also be offered eventually.

There’s a vast amount of equipment on offer which can do everything from find the nearest lavatory, to using computer wizardry to drive the car in traffic jams or help you avoid them totally. You can also have a useful heads up display, some systems which stop you from crashing into oblivious pedestrians and cars in your blind spot, plus variable sports steering and adaptive dampers.

The 4 Series will hit showrooms looking quite spiffy during October priced from £31,575 in 420d guise.

Now, see it in action…