GTA V Los Santos is mirrored on the real life LA. We take a look at the GTA 5 game locations and their real-life Southern California locations.

Los Santos city includes all the key areas of LA such as Hollywood, Beverly Hills, Santa Monica, L.A.’s Koreatown, South Central and Downtown L.A. (all with different names, of course) while omitting some of the less interesting areas. Beyond the city there is the rest of Southern California; Salton Sea region, Wine County and a military base.

The extensive topographic variation of Southern California makes the GTA V environment one of the the biggest, most dynamic and most diverse open world ever created.

The beautiful bridge is a spitting image of the iconic Bixby Creek Bridge in Big Sur, California.

The Vinewood Bowl, is an cool outdoor entertainment venue located beneath the Vinewood Sign – all the chart toppers like ‘Love Fist’ have been there! The “Bowl” is based of the iconic Hollywood Bowl in L.A. 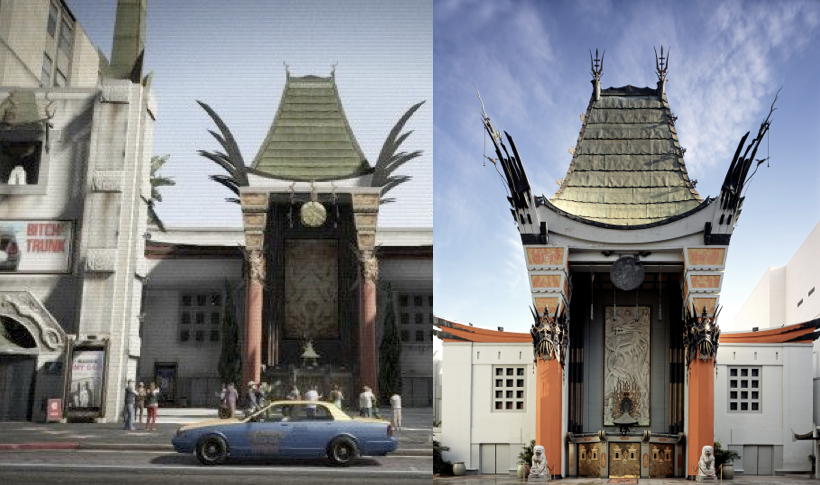 The Von Crastenburg Hotel is a ultra glamorous hotel located in Los Santos, San Andreas and is owned by the Von Crastenburg Family, one of the richest families in the world. Hmmm, sounds familiar and is modelled on the Roosevelt Hotel! Oh, this is the location for Franklin’s epic hotel assassination mission.

Tequil La-La is influenced on the legendary rock n’ roll nightclub ‘Whisky a Go Go’ located on Sunset Boulevard in Hollywood. It is featured in the Stranger side mission Vinewood Souvenirs – Willy, where Trevor Philips must collect a gold tooth from Willy.

The Playboy mansion Easter Egg is found in northwest Richmond and includes the infamous grotto and play bunnies! Obviously based on Hugh Heffeners playboy Mansion in Beverly Hills.

Jefferson is a district slightly to the northeast of Los Santos and are inspired by the real life Tourist attraction the Watts Towers.

The Los Santos Storm Drain is a river canal that runs throughout most of Los Santos, San Andreas and is based on the real life Los Angeles River. The Canal is heavily involved in the mission ‘Just Business’ as a place of escaping the pursuing Russian Mafia.

The Alamo Sea is described as “a putrid, salt-rich lake.” This is pretty accurate since it’s based on the real-life Salton Sea, a shallow, saline, smelly rift lake.

Salvation Mountain hippie art installation served as the inspiration for GTA V’s Hippie Town in the Desert. It’s an hippie commune that serves as a “tribute to God and his gift to the world.” Damn hippies!