I’m sorry chap who works for Mitsubishi, I’m sure you worked long and hard on these three concept cars. It must’ve been very time consuming creating these three new vehicles – all the clay modeling, the computer rendering and what ever else. But may I ask, are you completely mad? Seriously, what kind of person designs these three cars then takes a step back and thinks ‘yes, that’s exactly the look I was after’? I can only presume they’re drunk. A lot.

Anyway, the big silver car is probably the most hideous one of the weird looking trio so lets start there. It’s called the GC-PHEV ‘Grand Cruiser’ which doesn’t sound at all like Toyota’s highly successful ‘Land Cruiser’. It uses plug in hybrid technology teamed with Mitsubishi’s all-wheel-drive system. Power comes from a 3.0liter supercharged V6 petrol engine and a high output electric motor which send drive through an eight-speed automatic.

The red car, is rather more attractive. It’s not actually THAT bad look if I’m honest. There’s more than a whiff of Lamborghini Urus SUV about it, and that’s no bad thing, maybe the Mitsubishi man wasn’t drunk when he penned this one. This concept is called the ‘Cross Runner’ XR-PHEV, which is, unsurprisingly, also a plug in hybrid. It’s powered by a 1.1liter turbocharged petrol engine and a lightweight electric motor and drive goes to the front wheels. It’s a sort of sub-Audi Q3 sized car, offering hatchback space and practicality with a high-ish driving position.

The little green clump of grossness is called the ‘Active Runabout’ Concept AR. It’s face is flat like one of those dribbly, wrinkly dogs, and it just looks, well, weird. The green goblin uses a more conventional hybrid setup compared to the other two car’s plug in hybrid systems. The Concept AR is powered by a 1.1liter turbo engine and electric motor. 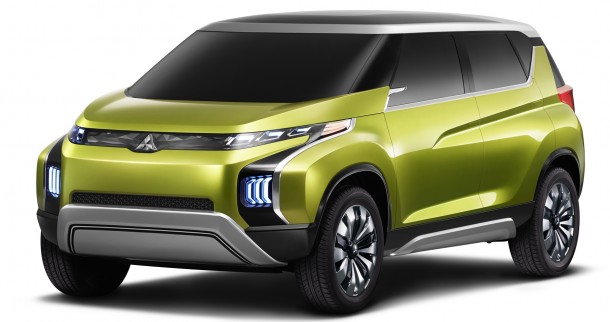 So then, what do these three concept cars mean for Mitsubishi’s actual production cars? Well we’ll eventually begin to see this sort of design language on the Japanese company’s new models, albeit slightly toned down, and hopefully with a little more, er, taste… Those sharp creases, swept back headlights, and blacked out A-pillars should appear in Mitsubishi showrooms soon. We’ll also begin to see a lot more hybrid models, small SUVs and a range of new fuel-efficient engines.

I suppose the powertrain technology previewed in these three Tokyo Auto Show-bound concepts is a little exciting. But quite frankly, this new design language is pretty horrible. Make it go away, Mitsubishi.