The F1 World Champion of 2013 wins his seventh consecutive race in Abu Dhabi and celebrates with donuts. Again.

In India last weekend after Sebastian Vettel won his fourth consecutive world title he celebrated with a smoke show, doing some pretty awesome donuts after crossing the line first. It’s all a bit of fun really. After every NASCAR race the winner does donuts, and it’s the same with almost every other form of motorsport, donuts are just what you’re supposed to do when you win a race. It’s almost disrespectful not to do donuts if you win. Seriously.

Unfortunately however, the organization that manages Formula 1 – the FIA – is run mainly by lady pensioners who’s feet are sore and ears are hurt. So when someone like Vettel comes along and decides to have some well-deserved fun after winning his fourth consecutive F1 World Championship they chuck a wobbly and issue his team with a 25,000 euro fine. 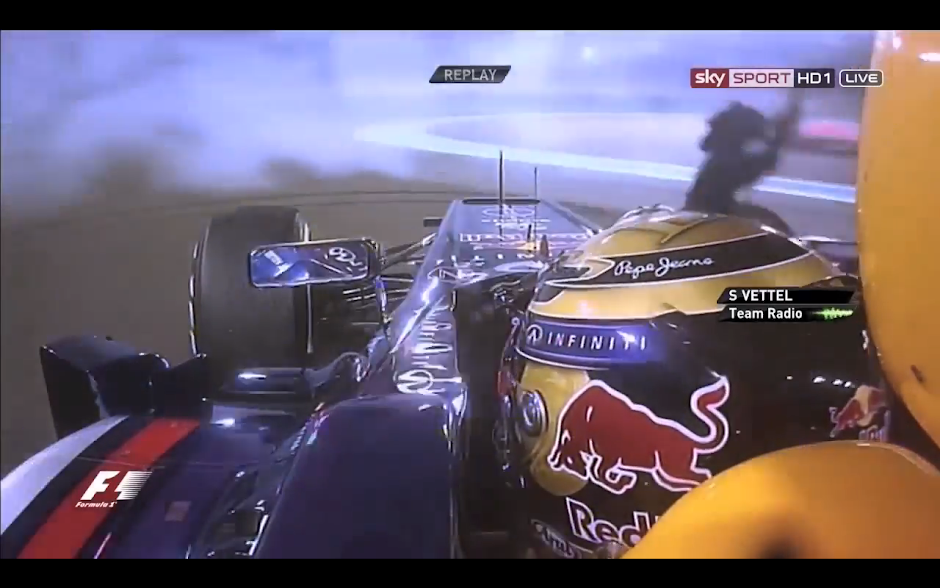 After winning his seventh consecutive race by a staggering thirty seconds at this weekend’s Abu Dhabi Grand Prix Vettel decided to do some more donuts. Once again proving that he is indeed a real human being. But what’s fantastic about this particular ‘incident’ is the radio messages between the Red Bull team managers and cheeky Vettel. Engineer ‘Rocky’ tells Vettel to calmly bring the car back to the garage, but instead the champ continues doing donuts and then quotes Kimi Räikkönen to say “yeah, yeah, I know what I’m doing!” before team boss, Christian Horner, buts in…

Vettel’s getting good at donuts, isn’t he? Reckon he practices in supermarket car parks in between races?