Two New Mexico police officers are under investigation after one opened fire on a minivan driven by a mother who had her five children inside.

If you think that sounds bad, wait until you watch the video below. The clip ends with the mother of 5 driving her minivan into the distance with one police man firing three gun shots towards the moving car. And that was after another cop violently smashed in the window of the car and scuffled with the 14 year old son after the mother failed to cooperate after being pulled over for speeding.

Sure the Mother could have prevented such an incident had she acted responsibly but what about those cops???

Apparently they are under investigation after a judge called the video and disturbing. Check it out below and see the details from CBS –

“Two New Mexico police officers are under investigation after one opened fire on a minivan. A mother and her five children were inside.

The shooting happened last month after a traffic stop turned into a high-speed chase outside of Santa Fe. And now, there’s newly-released video of the confrontation in which 39-year-old mother of five, Orianna Ferrel, can be seen being pulled over for speeding by a New Mexico state police officer just north of Santa Fe.

Ferrell doesn’t budge, but her 14-year-old son jumps out. He retreats when the officer pulls out his Taser.

The officer says: “You’re facing evading charges. You ran away from me, OK.”

Finally, she gets out of the vehicle, and then appears to ignore the officer, and struggles to get back inside. Out comes her son again. This time he scuffles with the officer. He runs backs to the car. The family is locked inside. The officer smashes the window with his baton. As Ferrell drives off again, another officer arrives and fires at least three shots at the van with the five children inside.

After a 10-minute, high-speed chase, Ferrell finally stops. She and her son are arrested.

In court, the district attorney charged Ferrell with five counts including child endangerment, resisting arrest and reckless driving. Her son was charged with battery.

Ferrell’s attorney said she was scared. The judge called the video disturbing and puzzling.

The two officers involved are under investigation.

In a statement, New Mexico’s State Police chief said: “If the investigation determines that the officer improperly discharged his firearm in this case, we will take swift action because improperly using a firearm isn’t tolerated by the State Police.”

You can read the rest of the story at 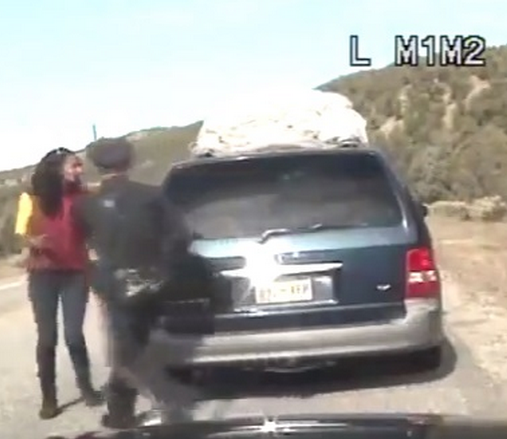 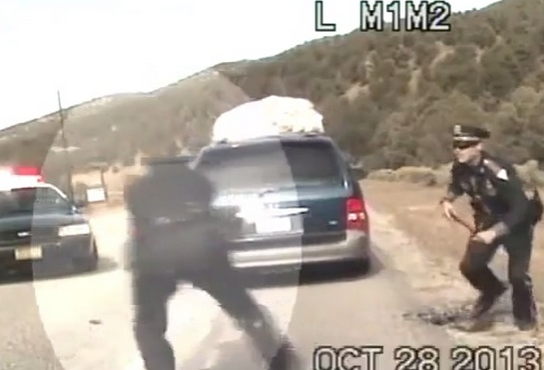