No more leaked images, this is the real deal. Ford lift the lid on the brand new 2015 Ford Mustang.

After all of the speculation, all of the spy shots, all of the leaked images and all of the hype, the brand new 2015 Ford Mustang is here. Ford fanboys, take your hats off now. The new Mustang is here with a new sharp suit, a new four-cylinder Ecoboost engine, and, perhaps most importantly, a suspension design that isn’t from the sixties. 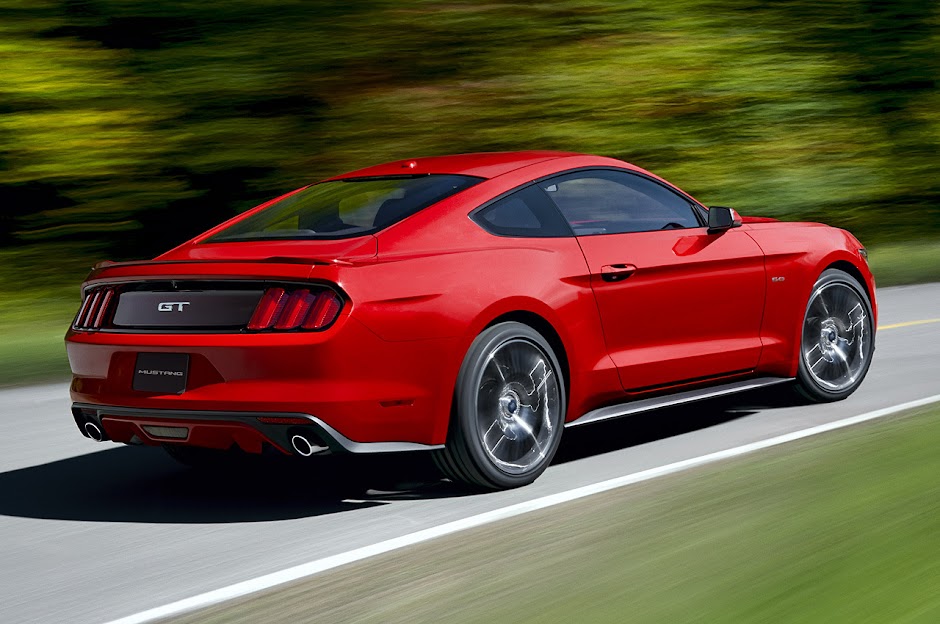 At the back there’s a new sophisticated independent rear suspension setup rather than a sketchy live rear axle. The front suspension has also been changed quite dramatically compared to the current car, a double-ball joint independent front end with MacPherson struts replaces the reverse-L of the current car. This is important if you want to go around corners without crashing. Or compete with European cars. Apparently the Ford engineers benchmarked the new Mustang against the BMW M3 and Porsche 911 – blimey. 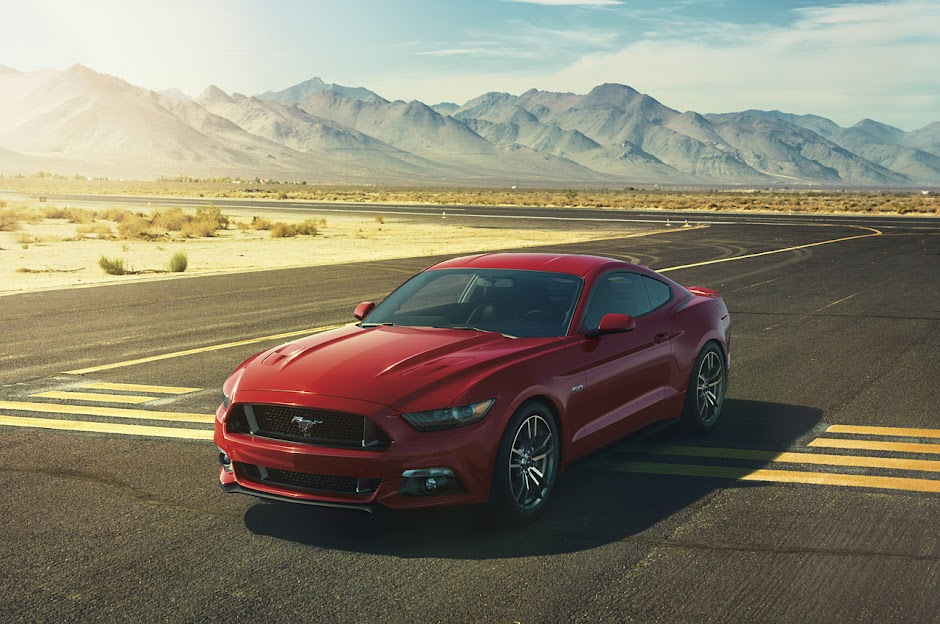 Under the bonnet there’s a selection of new or revised engines. The base V6 model uses a 3.7liter naturally aspirated V6 producing around 300hp, next up there’s the 2.3liter Ecoboost four-cylinder developing 310hp, and the big daddy 5.0liter V8 produces more than 420hp. All engines send power to the rear wheels, obviously, through either a six-speed manual or automatic gearbox. 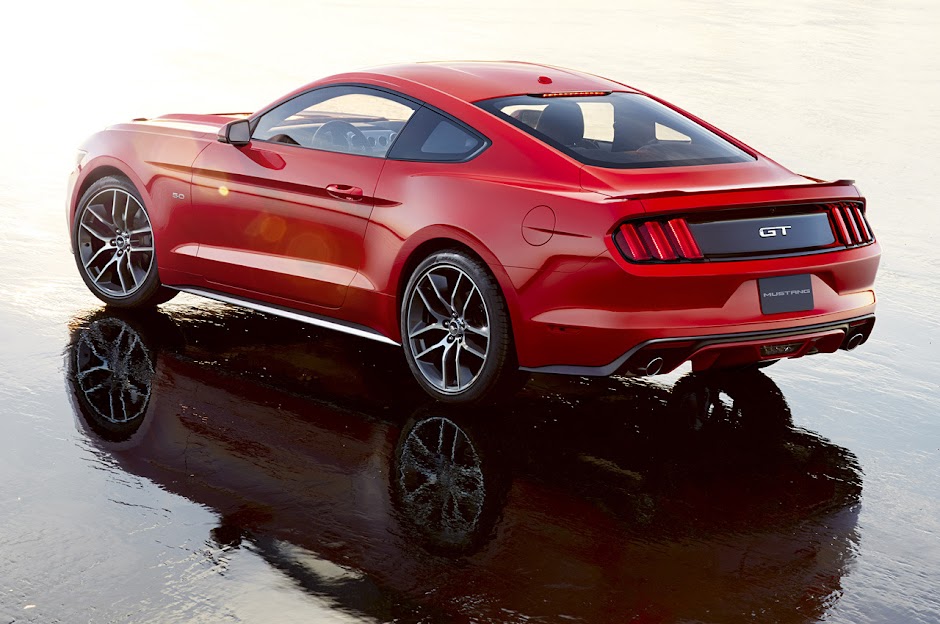 In the middle of the car there’s a new, more up-market feeling interior with all of the classic muscle car-inspired looks that you could ever want. A long strip of (real) metal spans across the dashboard and there’s leather on the dash and central stack, too. Aircraft-inspired toggle switches and controls complete the look. In terms of quality and feel the interior is miles ahead of the 2014 car, but there is still some nastier looking plastics around the transmission tunnel and door panels to remind you that the Mustang is the working class hero’s supercar not some posh car built to ferry bankers and accountants from their dreary offices to their favourite swanky ‘lounge bar’ – or something. 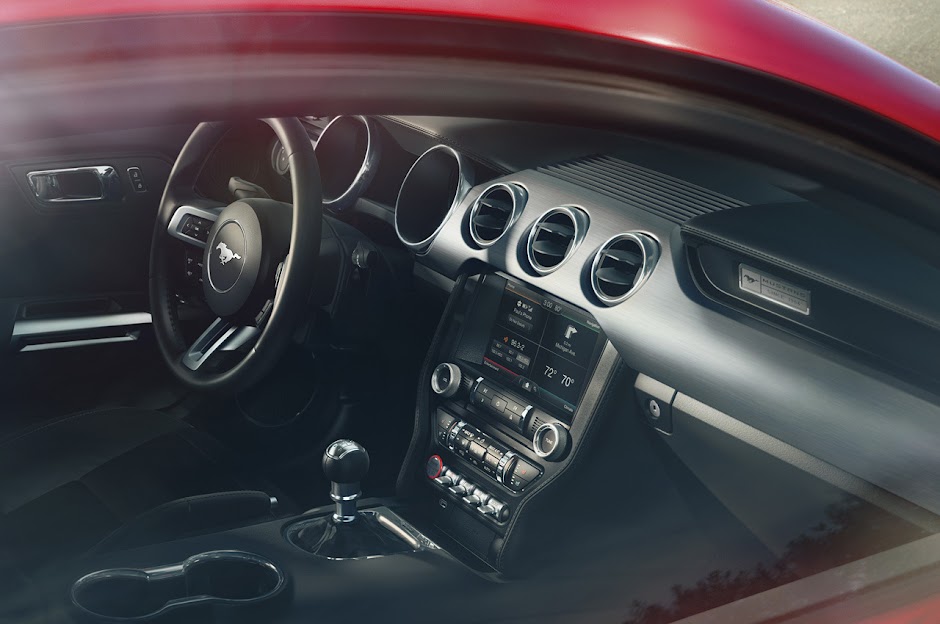 The Mustang is still undoubtedly a typical American muscle car in terms of style. It’s big, it’s brash and it doesn’t look subtle at all. But we reckon it’s a fantastic looking car, the lines toward the rear of the car are sooo smooth, and we like the intricate little details in the rear tail lights. The front of the car is typically aggressive with the classic Mustang grille and those razor sharp headlights. 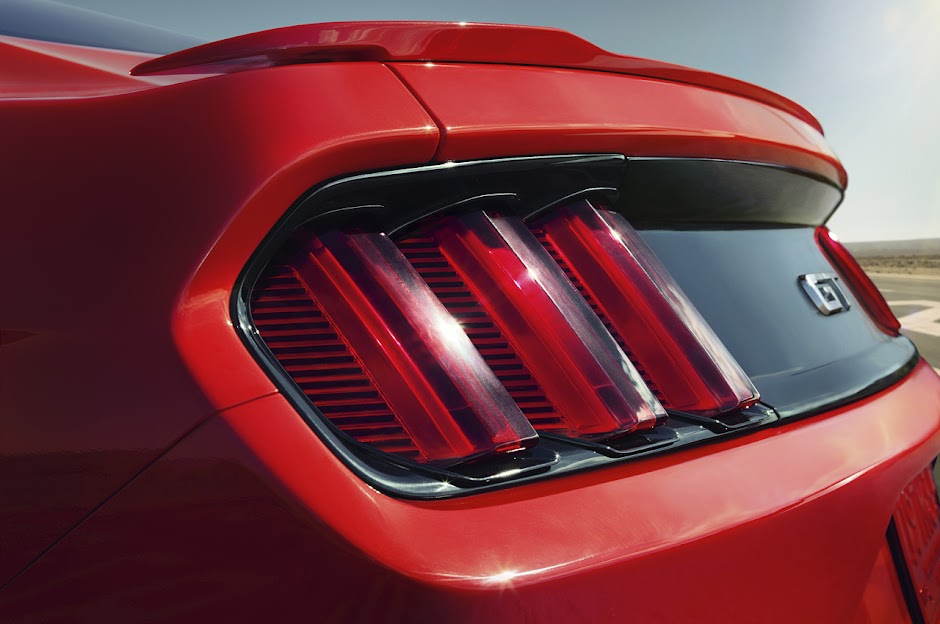 Overall, it’s a great looking car, and we suspect that many Mustang shoppers won’t be interested so much in the technology or the performance, but more the car’s styling and the whole ‘burnouts when the cops aren’t looking and drag between the lights’ theme that the iconic Ford muscle car represents. 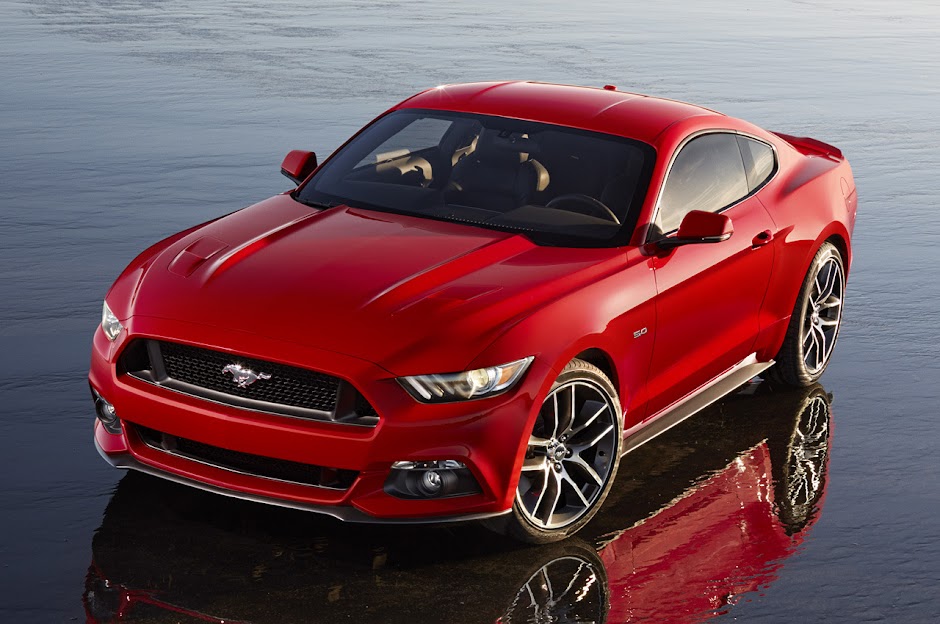 Ford will keep performance figures, including 0-60 times, close to its chest until some stage during 2014. But the new V8 Mustang supposedly features a launch control mode to maximise traction off the line, and is expected to hit 60mph in under five seconds.