Images of BMW’s brand new M cars, the M3 Saloon and M4 Coupe hit the web ahead of the official reveal.

Yesterday BMW dropped a totally unrevealing teaser video of its new M models, the M3 saloon and M4 coupe. This annoyed us, because the new M3 and M4 have been coming for the past five months. There were ‘concept’ cars, technical details released and hundreds of spy images and videos. And while  BMW still haven’t revealed any official details, we can now at least stare at the pair without any swirly car camouflage hiding their lines. And as far as things to stare at go, the new M cars are not bad at all, are they? 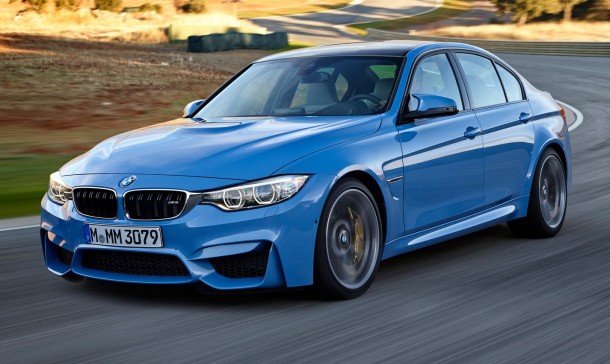 The M3 is the cooler car in our opinion, its behind is just – for want of a better word – bangin’. The rear wheel arches are so wide and awesome, the quad exhaust pipes are racy, the carbon roof is exquisite and the front end is chiselled and nice. And in this light blue hue, it looks pretty much perfect. We likey.

The M4 coupe is no Ugly Betty, but compared to the M3 Saloon it looks a bit…predictable. There is of course a very good reason for that, because it looks exactly the same as the M4 Concept that BMW showed a few months ago. It’s even the same colour. OK, the exhausts are a slightly different shape to those of the concept and it hasn’t got a carbon splitter at the front, but if you placed the two cars next to each other you’d swear they were identical.

As for what’s beneath the metal, both cars use a 3.0liter twin turbo straight six engine producing around 430hp, which is hooked up to a seven-speed dual clutch automatic gearbox (or six-speed manual) sending drive to the rear wheels. Power is distributed across the rear axle via a clever active ‘M’ differential – this aids stability and driftability. 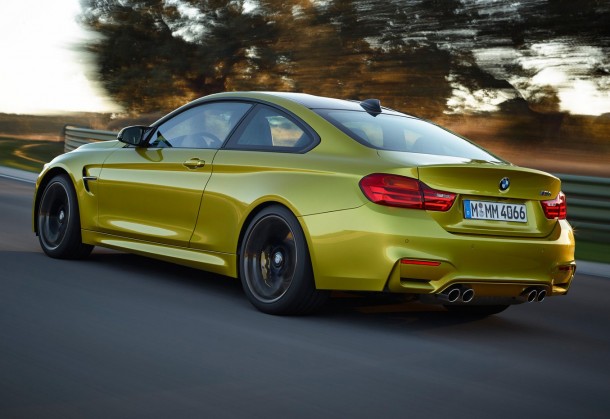 Apparently the official details will come out on Thursday so stay tuned for more juicy M3 and M4 news.