It’s the latest track-honed mid engine V8 Ferrari, complete with stripes and 597hp to make it swearword fast! Carhoots have the details.

This, is the latest in a line of lightweight, track-honed mid-engine Ferraris. A successor to the 348 GT Competizione, the 360 Challenge Stradale, and the F430 Scuderia – a group of amazing cars, with stunningly artful names… This car’s name is ‘Special’, and that makes it latest stupidly named supercar to come from Ferrari. 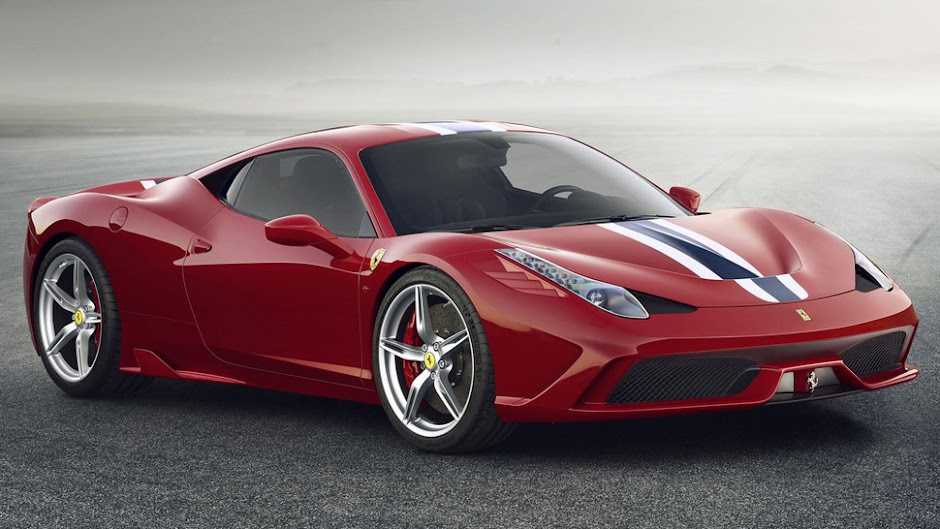 But, names probably don’t matter much when you’ve got a 4.5liter naturally aspirated V8 sitting behind your head screaming loudly and violently at 9000rpm. NINE THOUSAND. The Speciale uses a tweaked version of the standard 458’s engine which now produces 597hp (up from 562hp) inching the 458’s horsepower figure ever closer to the McLaren 12C’s thumping 612hp – produced by a V8 with two turbos.

According to Ferrari its V8 now develops more horsepower per liter than any other normally aspirated road car engine…In The World.

As you’d imagine, when those power gains are combined with a substantial 90kg weight reduction the 458 becomes a bit more er, special (sorry) and quite quick. 0-62mph takes three seconds flat and 0-124mph is dealt with in just 9.1 seconds, it is swearword fast. Around Ferrari’s own Fiorano test track the Speciale recorded a scorching lap time of 1m23.5 seconds, putting it 1.5 seconds ahead of the standard 458 and just half a second behind the maniacal 730hp F12 Berlinetta. 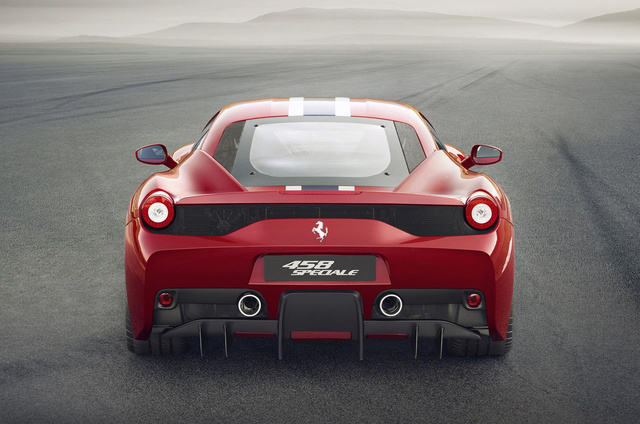 Obviously, with more power and speed comes a higher likelihood of the 458 detaching itself from the ground and becoming an aircraft of sort, so the aerodynamics have been fiddled with, too. The front grille is completely new, as is the new sculptured bonnet which features more ventilation. At the rear you’ll find extra cooling vents, a pair of integrated tailpipes replacing the standard 458’s trademark triple system and a dirty great big racecar-like diffuser for added down force. There are lots of clever hidden active aero bits as well, all of which make the 458 Speciale Ferrari’s most aerodynamic road car yet.

It all sounds jolly good, but there is however, a bit of a problem. It seems that the Ferrari boffins have been reading the Carhoots blog, because this special 458 employs something called ‘Side Slip Control’. It is essentially another acronym to help the car’s brain control slides more accurately by using the traction control and electronic differential to shuffle power across the back axle. And I invented the system. Sort of…

Now, I’m not going to make a big deal out of this like an angry old woman at a supermarket, but if you’re reading this Ferrari executives – which you are, obviously -, this is my message to you: if you’ll allow me to spend a day oversteering your new 458 Speciale and destroying a set of its new Michelin Pilot Sport Cup2 tyres, we can forget about this whole, slightly embarrassing, occurrence – you know how to contact me. 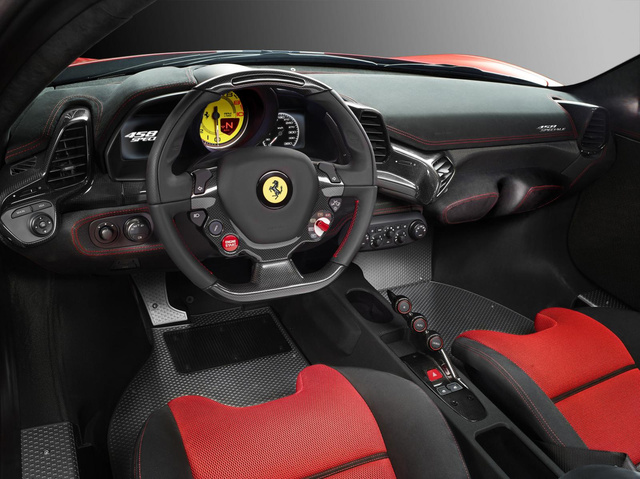 With that out of the way we can now discuss the 458 Speciale’s incredibly beautiful interior. Naturally, inside it’s much like the standard 458 but with more carbon fiber, more redness, more general coolness and less pointless carpet. It’s very racy.

Dorky name aside, the 458 Speciale is a seriously cool car, and we want one. Quite badly.