BMW have begun the drip feed of details surrounding their second ‘i’ model, the i8 hybrid sports car, ahead of its official unveiling at the Frankfurt Motor Show. Carhoots have the tech specs.

Hybrids were once vehicles driven solely by stupid people who didn’t really care much for performance, handling, fun, speed, style, or the environment – ok maybe not that last one, but you get the idea. Hybrids have never been very desirable cars, unless of course you’re the sort of person who drinks grass in liquid form and ties themselves to trees for a living. 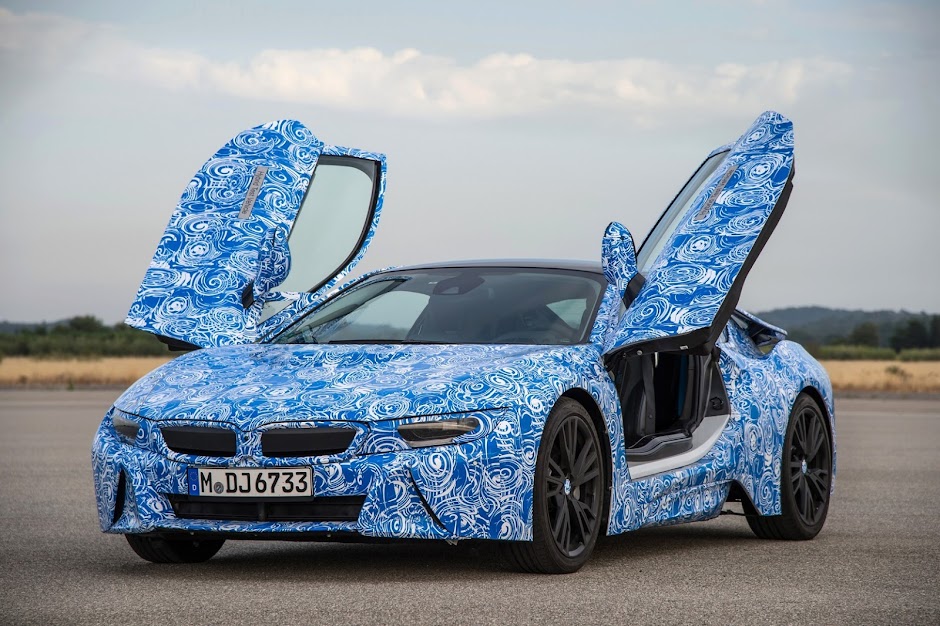 But, in recent months a number of car manufacturers, whose goals are centered mainly around going very quickly in a very loud way, have unveiled hybrid vehicles of their own. Most of them have in excess of 900hp as well, so they aren’t exactly rivals to the Toyota Prius in terms of performance, or price, because these are very exclusive limited run supercars wearing million dollar price tags.

BMW have done things a bit differently. They’ve created a highly efficient, comparatively inexpensive, hybrid sports car, with M3 equaling performance by being a little bit clever and not showing off with high price and horsepower figures. 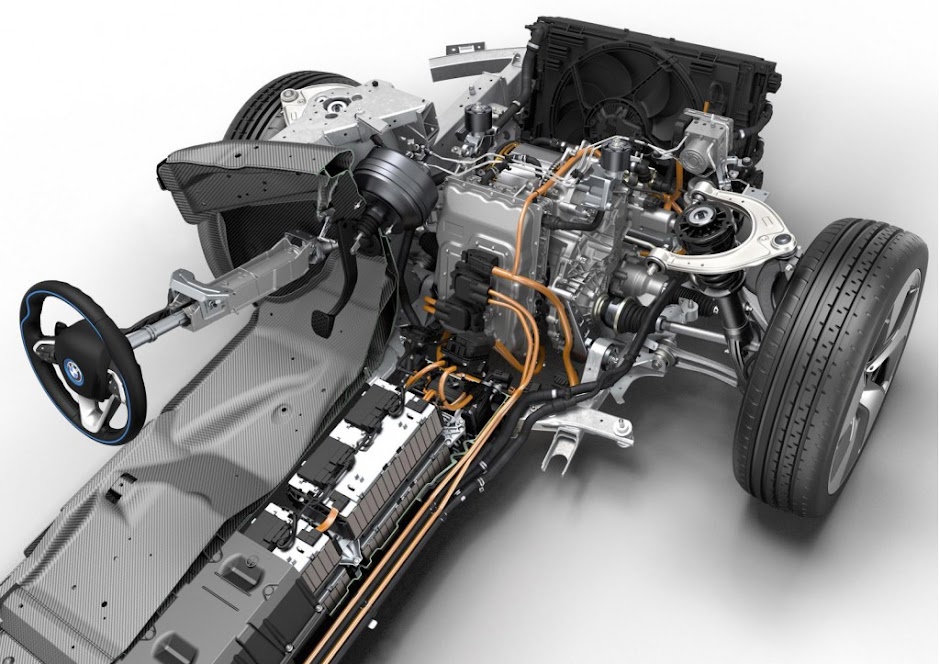 Lets start with the chassis hardware, because it is a big part of the reason why the i8 can deliver 95mpg, why it’s rather brisk in a straight line and why it should handle quite well. The i8 uses an all aluminum chassis with a lightweight carbon fiber reinforced plastic (CFRP) passenger cell. Elsewhere there are magnesium instrument display supports, thin lightweight glass panels, and lightweight forged alloy wheels. Everything has been made light – even the nuts and bolts that hold the thing together are made from aluminum. As a result the i8 weighs less than 1490kg and BMW claim a perfect 50:50 weight distribution as well. 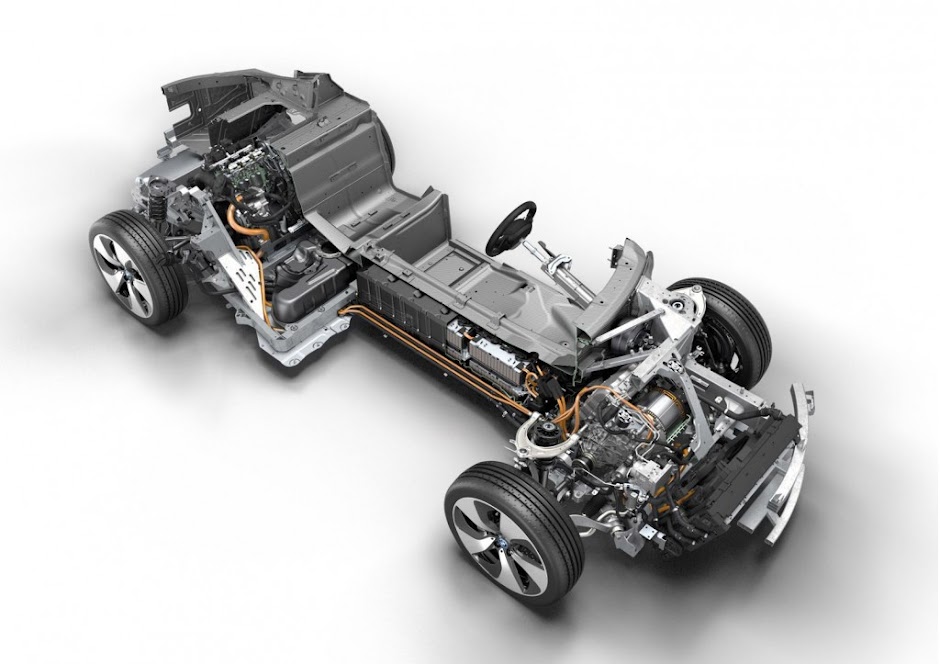 The electric motor sits on the front axle and sends 131hp/236lb-ft through the front wheels, it sources power from a battery pack located in the center of the car where a conventional vehicle would house its driveshaft and gearbox gubbins. Mounted in the middle behind the passenger compartment is a turbocharged 1.5liter three-cylinder petrol engine developing 231hp and 236lb-ft of torque – quite a sizeable chunk of power for such a small engine.

The combustion engine sends power through the rear wheels via a six-speed automatic gearbox, which is a bit odd. Surely the brilliant new eight-speed or a dual clutch ‘box would’ve worked better. We can only assume that BMW have stuck with the six speeder due to packaging requirements – it’s a smaller and lighter unit compared to a dual clutch or eight speed ‘box. The combined power output is a healthy 362hp and 420lb-ft of torque, enough to get the i8 to 60mph in less than 4.5 seconds, and onto an electronically limited top speed of 155mph – slow it is not. 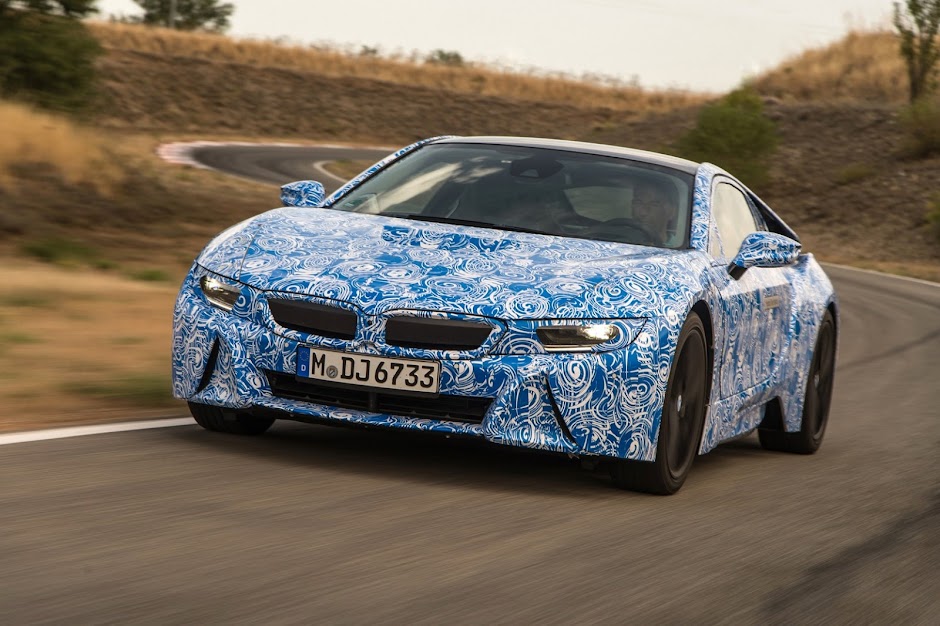 While both motors are in use the i8 is effectively all wheel drive, but during corner entry the power split is biased toward the rear wheels to improve turn in precision and reduce understeer. And this variable front to rear power split makes for “excitingly dynamic cornering”, apparently. The Dynamic Traction Control system even allows some “controlled drive wheel slippage” during exuberant driving – sounds tremendously exciting when it’s put that way (are all Germans actually robots?). What’s more, the rear tyres are those rubbish 215 section, low rolling resistance, eco tyres, so this hybrid could be a bit of a hooligan, y’know. It all sounds jolly good. 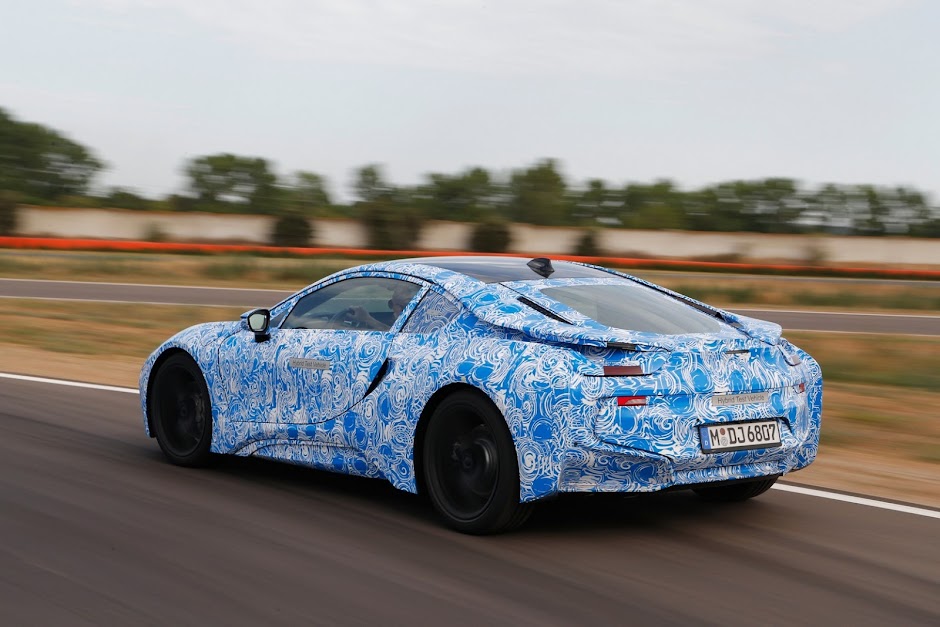 Naturally, the i8 features Eco Pro, Comfort, Sport and Sport Plus driving modes, each adjusting throttle sensitivity, gearbox behavior, steering calibration and damper stiffness to change the character of the car depending on driving conditions or your mood. But, no matter what mode you’re in the i8 “makes the driver aware of [its] sporty temperament at all times“, which is nice. 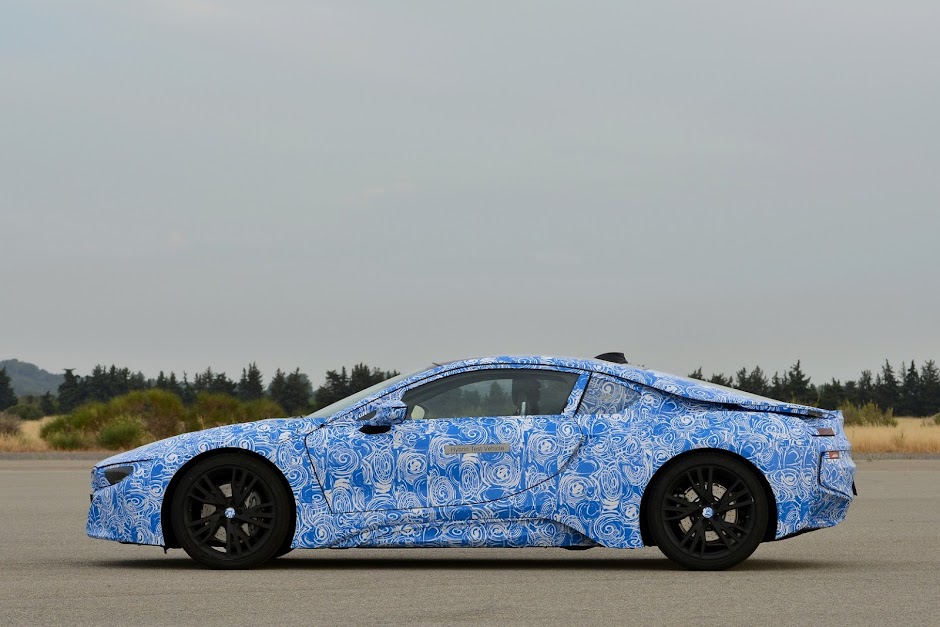 Driven on electric power alone the i8 can travel approximately 22 miles at speeds of up to 75mph. To prolong battery life the cells are topped up while the car coasts, using the petrol engine as a sort of generator, or if the batteries are healthy the drivetrain can be decoupled from the wheels completely to increase efficiency. BMW reckon that with the fuel tank brimmed and the batteries full, the i8 could travel about 310 miles before you would need to stop and refill the fuel tank or batteries. 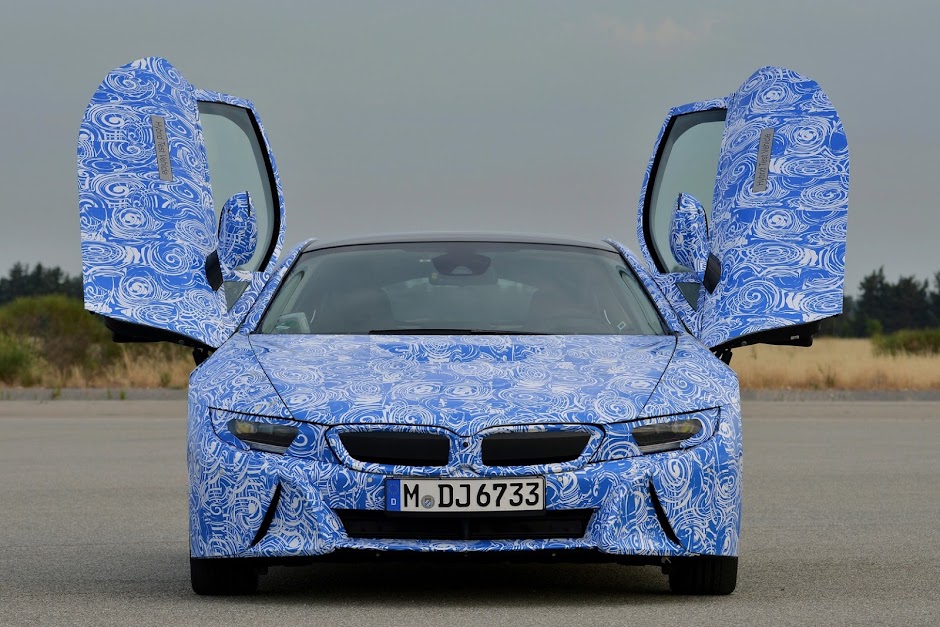 From a standard household power outlet it would take 3.5 hours to charge the batteries completely or 1.5 hours from a 220 volt Level 2 charger. That is still quite a long time though, so you’d need to take a lengthy rest stop while you waited for the batteries to recharge. That means lots of eating disgusting rest stop food and that will eventually make you a bit fat. However, because the i8 is a hybrid you can simply buy some more petrol from a man and be on your way again without experiencing too many unpleasantries.

We won’t know exactly how the production i8 will look until it’s unveiled at the Frankfurt Motor Show next month, but if you stare at these camouflage shots for long enough you’ll get a pretty good idea. Clearly it’s a whole lot prettier than any other eco car. Even dressed in camouflage the i8 makes the Nissan Leaf, Toyota Prius and Mitsubishi iMiev look like a warts.