I’ve just emerged from a dreary accounting lecture, which means that I’m very sleepy. But, I now know that technically this electric Defender is a massive waste of money, purely because it isn’t going into production.

So why would Landrover spend millions of pounds developing a fleet of electric Defenders? To see how far they could go with pure electric propulsion and research how this technology could be applied to future models. It’s all about research and development – another term that I’ve become familiar with in my business and accounting lecture.

The electric Defenders to be shown at the Geneva Motor Show are powered by a 94hp, 243lb ft electric motor which is fuelled by an air-cooled 27kwh lithium ion battery which resides where the very un-polar-bear friendly diesel engine once did. Landrover reckon that during normal driving the electric Defender can travel approximately 50 miles, or if you’re driving offroad, which lets face it, you are – it’s a Defender for Petes sake – the battery should last for around eight hours before needing a recharge. Recharging takes just four hours if you use a 7kw fast charge or 10 hours using a 3kw portable charger.

The legendary offroad ability of the Defender is kept in tact since much of the Defenders offroad components remain, like the four wheel drive system and differential locks, plus you get a reduction gearbox and the Terrain Response system has been incorporated, too. The wading depth should be best described as shocking (pardon the pun) since electricity plus water equals peril, but not in this case, as Landrover quotes the wading depth as 800mm, which is pretty ruddy good. 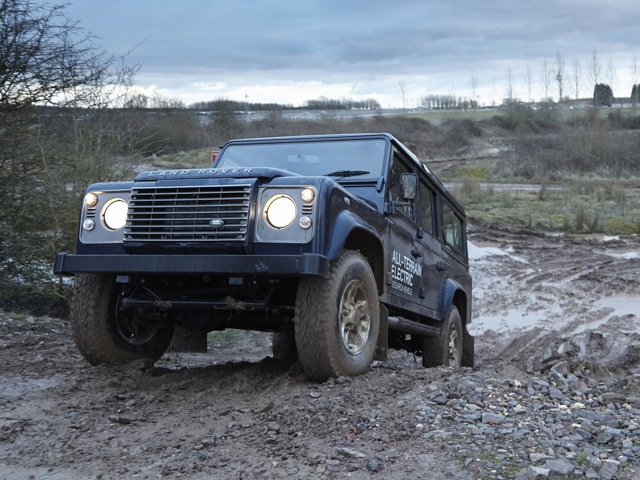 However, I do have a problem with this car, and it’s not the general driving ability of the electric Defender. No, Landrover reckon it’ll pull a 13 ton ‘road train’ up a hill, not a very big hill, but still impressive nonetheless and it only weighs 100kg more than the standard diesel powered Defender, which means it’s hefty (2055kg), but really, who cares, this isn’t a sports car, is it?

My problem is with the whole range situation, because the countryside – where Defenders are generally taken for off road shenanigans- is usually quite a distance away from, well, anywhere. Which means that by the time you arrive at said countryside, ready for some serious offroading, the battery is going to be just about flat, and then you’ve got to find a way of driving back home from the countryside.

And what happens if you conk out in the middle of nowhere?

You’ll be eaten by savage bears and other scary creatures, is what’ll happen. Having said that, while travelling down hill, the battery is recharged through a regenerative braking system to reduce electricity consumption. So there’s a tip, if you happen to, for some odd reason, find yourself driving one of the seven electric Defenders through some wilderness, try and drive down as many hills as possible. It’ll stop you from being eaten. 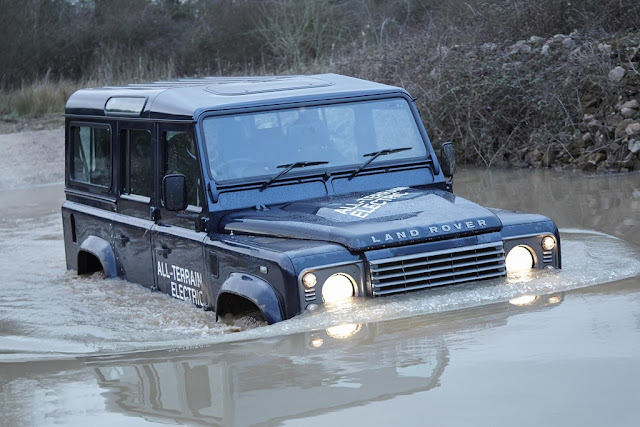 You’ll be in deep water if the battery runs out

So the same problem that plagues all electric vehicles is still apparent here. The lack of range. So is that money well spent by Landrovers research and development boffins?

Well according to accounting, no. No money is money well spent, but if you ask me, the real research and development needs to be put towards improving the battery technology so that these electric vehicles can actually be used properly. It’s quite obvious that car manufacturers know how to make electric cars – nearly everyone’s got one- what they don’t know how to do is make batteries that provide acceptable electric vehicle range.

Do you agree with this article? Are Land Rover making electric vehicles just for their ‘green’ badge? Let us know your thoughts by commenting below or tweeting us at @CarhootsUK