Images of BMW’s new i8 hybrid sports car have appeared on the Interwebs ahead the car’s official reveal at the Frankfurt Motor Show. And my god is it pretty!

We’ve got butterflies in our tummies! We could very well be in love with this car, y’know, or a bit hungry, but it’s probably the former. Seriously, just look at BMW’s new i8 hybrid sports car! It is a beautiful piece of sculpture, a futuristic yet classically elegant design and one that you’d expect to only ever see spinning around on a motor show stand behind a pesky rail, not on the road or even in your very own garage! It’s a stunning thing. 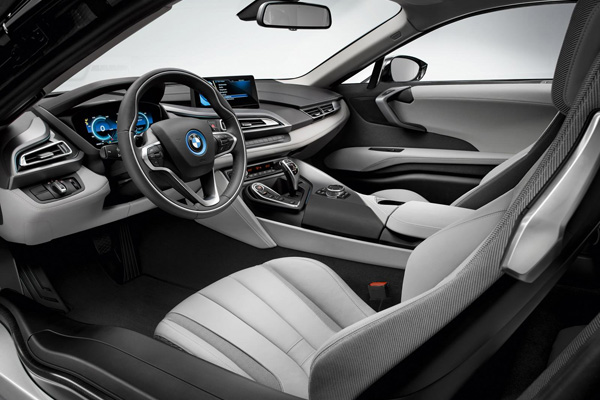 The i8’s beauty runs below the surface, too. Because it is of course a tech-laden hybrid, and clearly one that makes the Toyota Prius and other such atrocities look like fat elephants, with warts on their heads, clothed in Lady GaGa costumes – completely stupid and a bit hideous. The i8 uses an all aluminum chassis with a carbon fiber passenger cell to keep its weight below 1500kgs, the engineers have made everything as light as they dare – even the nuts and bolts that have been used to hold this beautiful creation together are made from aluminum.

As the supercar looks would suggest the BMW i8 is quite fast. It’s not fast in the same way as those 900hp nut-job hybrid machines from Ferrari and McLaren, which make your face fall off every time you stomp on the accelerator pedal, but the performance should be adequate for most people. The i8 sprints to 62mph in less than 4.5 seconds and at full stride it’ll be doing 155mph.

Power comes from two sources; an electric motor with 131hp/236lb-ft which drives the front wheels alone and a 231hp/236lb-ft 1.5liter three-cylinder petrol engine sits mid-ship driving the rear wheels, so it is effectively all wheel drive – how they’ve calibrated the two power sources to work together and feel natural beggars belief. So the total power output of the system is 362hp and 420lb ft of torque – small numbers they are not. Similarly, the mpg figure is rather large – BMW reckon it’ll do well over 100mpg. Impressive, huh?

So, this is a hybrid with M3-equalling performance, Prius-beating efficiency and killer supercar looks. What it is, is something that we want to take out for dinner to fancy restaurants, send cheesy text messages to and buy corny gifts for, it’s something that we really, really want.