It was only a matter of time before an ‘iCar’ would be introduced to the world but you maybe a little surprised to see that VW and their iconic Beetle model are the first to collaborate with the technology leaders, Apple, to create the ‘iBeetle’.

The guys over at Rushlane.com revealed all:

A 2014 Volkswagon iBeetle, a special model which will be entering markets in early 2014 was on display at the just opened, Shanghai Auto Show 2013. The iBeetle is one of the first vehicles in the world to sport genuine integrative interface for Apple iPhone and is available as an app or a standard feature in both iBeetle and iBeetle Convertible.

Pricing has not yet been revealed, and the car is expected to go on sale across various markets early next year. The iBeetle is fitted with a special docking station on its dashboard and the iPhone snaps into it integrated with the vehicles.

All iPhone functions can be used in this new Beetle edition, which includes navigation, making calls hands free, listening to music and much much more.
This is the first Volkswagen to sport a new docking station and iPhone app.

Interiors will sport black seats upholstered in Vienna leather while seams will be in contrasting light Ceramique. iBeetle will sit on 18″ disc alloy wheels in Galvano Grey along with chrome wheel covers while door sill plats will bear the iBeetle signature. 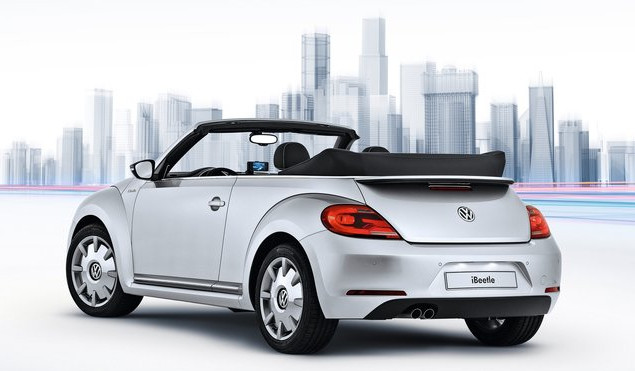 In VW’s words, this is what the new app can do;

Spotify:
Lets users stream media such as new songs, customized playlists or online radio stations into the Beetle. Those who wish can post their favorite music directly to friends. In addition, users in the Beetle can switch between “Spotify” and “iTunes” at any time.

Expert:
Offers five functions which make the iPhone an extended on-board instrument of the Beetle, such as a G-Meter (for measuring lateral acceleration), oil and coolant temperature gauges for the engine, a chronometer, and a compass.

Trainer:
Can be used to compare driving times, distances, and fuel economy values for different routes between any two destinations. Here, too, tips can be posted via social networks like Twitter and Facebook-such as which route is faster to the office.

Postcard: Sends the current location of the Beetle to friends as a digital postcard with a map motif.

Photo:
Sends photos taken inside the car to numerous social networks. Simply activate it, and the app does the rest.

Milestones: Available when the smartphone is undocked. Rewards its users with virtual “milestone stickers” for the Beetle when certain tasks have been completed.

This is a really cool car and we can’t wait to see it on the roads. Definitely suited to the female buyer, the VW have made the Beetle even more funky and very much 21st century. A great move for VW and a great car that will be no doubt be embraced by you girls out there. 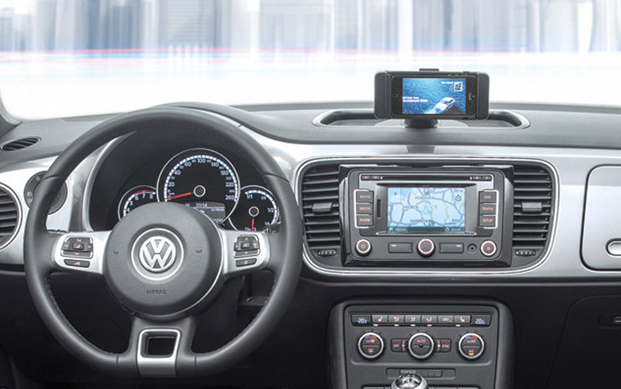