Move over Bugatti! The Hennessey Venom GT triumphs the Bugatti Veyron to become the fastest production car ever hitting a record top speed of 265.7 mph.

When I first saw the Hennessey Venom GT a few years back, right when I was beginning to really become obsessed with cars, Koenigsegg had just launched the 1000hp Agera and that was properly insane and in my eyes, the ultimate. Then Hennessey came along with what in simple terms was a Lotus Exige packing a 7.0 litre twin turbo V8 producing in excess of 1244hp. I almost didn’t believe that something so totally mad could exist. I thought John Hennessy was a complete maniacal nutter, he still could be, but after hearing his story of how he “just wants to make fast cars go faster”, I see him simply as genuine petrol head that just loves what he’s doing. The Venom GT is his baby, and his dream is to build the fastest production car on earth. And today, that dream is a reality.

But first, a bit of background. The Venom GT was borne out of a bit of a joke. John Hennessey wanted to go faster than any other production car on earth, so he thought, we need light weight and big power, obviously. Why not drop a twin turbo 8.4 litre Viper V10 into a Lotus? Total madness. He and his engineers had a bit of a laugh, then got a man with a pencil to make up some renderings of what it could look like, and John liked what he saw. Then the Internet got all ‘internety’ and the images leaked online, as they do. Of course a rich Arabian prince saw them, and wanted one of these mental machines immediately. So, John Hennessey and his team of master mechanics set about building what is now the fastest production car… In The World. 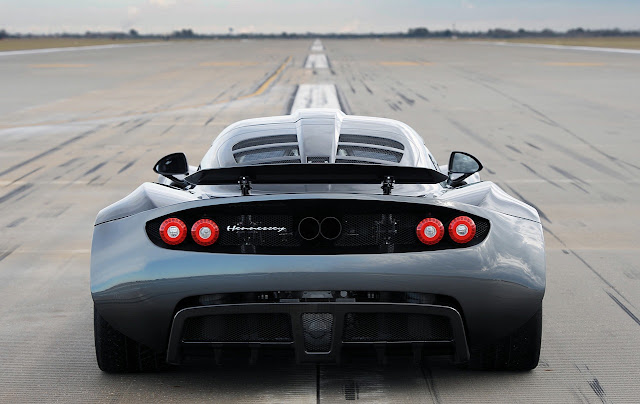 The Venom GT starts out in life as a Lotus Exige, it’s then sent to a manufacturer in the UK who prepares the body and structure for Hennessy’s monstrous power plant. Everything ahead of the front windscreen is new, as is everything behind the rear bulkhead, so what’s left in the middle is the basic Exige tub, which is then strengthened. To think of this car simply as an Exige with a big engine is a gross understatement. It’s a whole different car. The bare chassis is then shipped over to Hennessey’s production facility in Texas, where the engine of absolute gargling fury and anger is lowered into the chassis and the bespoke carbon fibre body panels are fitted along with the suspension, steering system, wheels and mahoosive brakes.

The engine is totally bespoke; it starts off as the 7.0liter normally aspirated V8 from the new Camaro Z28. The block is strengthened, it’s then given a pair of turbos, all new internals, cooling systems, dry sump, the lot. The only thing the monstrous engine has in common with the Z28’s unit is that they both use the same standard GM alternator. The outcome is a startling but slightly underrated 1244hp and 1155lb ft of torque, we say underrated because Hennessy haven’t actually been able to dyno the car properly because it spins its 345 section – about the width of a Smart car – rear tyres through third and fourth gears ON the dyno – it is that nasty. The beast – AKA engine – is hooked up to a manly six speed manual gearbox – no paddle shift nonsense here. It is a proper widow-maker type of car, this, if you poke it, it’ll bight. You’ve got to grab it by the scruff of the neck and show it whose boss to really get the best out of it, and if you’re going to do that you’d better be ruddy brave, awake and skilled. 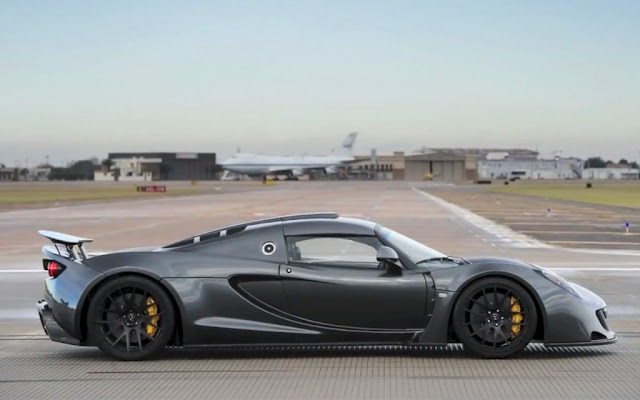 Today, the mighty Venom GT is the undisputed fastest production car in the world. On February ninth, with the air buzzing with horsepower – of both the ballistic car and mega fighter jet variety -, the Venom GT took off down a Californian runway that NASA land their aircraft on and headed for the record. Over the 2 mile long straight the Venom GT hit 265.7mph making it the fastest production car… In The World, and at this point it was still accelerating at a freakishly substantial rate. Given enough space John Hennessey doesn’t doubt that his creation could crack 275mph, maybe more.

Sure those of you who are extra precise, aware and probably German, might be thinking, ‘but the Veyron SS can do 267mph and you’re right. It can, well the record setting car can. But customer cars can’t, they’re electronically limited to a piffing top speed of just 258mph, something that Guinness World Records only recently discovered, and so the Veyron was stripped of its Worlds Fastest Production Car title.

So, the Hennessey Venom GT does it for America, even though it hasn’t trumped the Veyrons 267mph record, watching the video below and knowing that it can crack 200mph in just 14.51 seconds – a production car record – I completely believe that this car, bullet, thing has the ability to absolutely trounce the Veyron Super Sports figure.

With most high end performance car manufacturers now shying away from top speed records and focusing on mashing your mind through the corners with hybrid systems and huge down force, I’m glad that there are still small manufacturers like Hennessy Performance who just want to go fast. Manufactures who still honor the whole ‘my car’s faster than yours’ line that might be totally irrelevant to most in this day and age, but for anyone whose into cars, nothing gets you fizzing like raw speed and epic power. And the Venom GT quite clearly delivers that in one frighteningly fierce package that’s going to take a lot to beat. I have a feeling this loud and lairy, venomous (sorry) machine will reign supreme for a long, long time.