Infiniti draws up some sketches of its angle-y Q30 hatchback concept ahead of the Frankfurt Motor Show. It looks like a cheetah – if you squint a little… Ok, a lot then.

Wowsers. Someone at Infiniti can use a pencil fairly artistically, can’t they? It looks like they’ve modeled their car after a sort of panther, cheetah, er, big cat thing with wheels, it’s even the right color! Sort of. 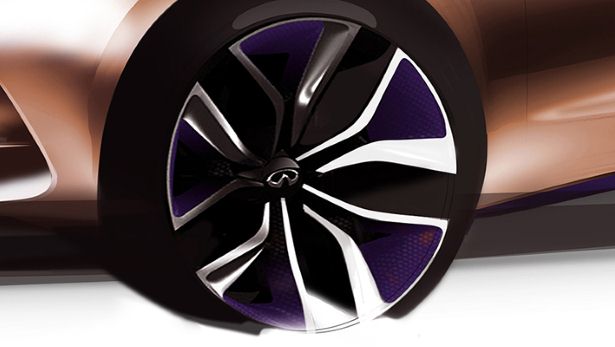 Now, just imagine a toned down, less extravagant, production version of the wild car you see here in these sketches and you’ve got yourself Infiniti’s rival to the BMW 1 Series and Audi A3, but certainly not the Mercedes A Class, because that’d be totally mad, for reasons which will soon be made apparent.

Y’see, Infiniti’s Q30 hatch will be built on the Mercedes A Class platform. So, naturally, you might think that Mercedes are helping Infiniti build a rival to their own car, but no, actually. Because apparently Mercedes and Infiniti aren’t rivals, Lexus already has the job of being Mercedes’ Japanese rival covered and Infiniti is actually more like a rival to BMW – who are, without doubt, Mercedes’ biggest rival… It all sounds deeply confusing. But, the Q30 hatch will use Mercedes underpinnings and that’s that.

The Q30 will also be Infiniti’s first model to be influenced from the outset by Mr. Sebastian Vettel, their ‘Director of Performance’. Presumably this means the Q30 will be a sneaky, backstabbing bastard that sounds a bit feminine when it gets excited after winning a race… Maybe it’ll handle well, too.

We’ll see the Q30 Concept car in the metal at next months Frankfurt Motor Show before it enters production during 2015.