Have you ever looked at the Mercedes CLS63 AMG with its striking swoopy coupe-like lines thought ‘yep, I’d definitely go there’, then been brought to tiers by the £82,000 asking price? Us too. But weep no more because Carhoots has a carbon fiber dressed solution. It’s that angry swoopy coupe-like thing you see above, the Mercedes-Benz CLA45 AMG. And it’s a bit, OK quite a lot, less expensive than its bigger CLS63 brother.

Beneath the pumped up exterior lives the most powerful production four-cylinder engine… In The World. It produces a staggering 354hp and 331lb ft of torque via lots of turbocharged boost. And here’s a fun, slightly geeky fact for you, that 2.0liter turbo engine in the CLA45 produces more horsepower per liter than McLarens 620hp twin turbo V8 in the 12C. So it’s packing some serious heat and technology, then.

So it shouldn’t be surprising to learn that this baby AMG, thanks to its 4MATIC all wheel drive system – yes, that’s right, no big black lines, sadly – hits 62mph in just 4.6 seconds, but somehow, it just is! The gearbox is of the seven speed dual clutch auto variety, just like all the other monstrous AMG models, and this one borrows its software from the SLS – the one with the funny doors and no tyres left. This means you get a ‘race-start’ mode, but you can just call it launch control, because that sounds much cooler and less like the system that Mark Webber seems to constantly get ‘glitches’ with, and there’s a double declutching system which, just like in the new Porsche 911 GT3, simulates a clutch kick for fun sideways action. 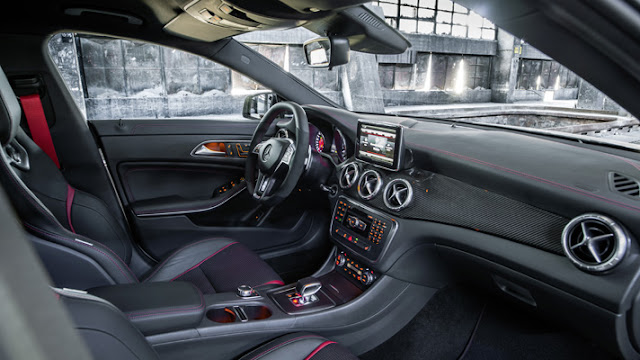 Problem is though; we’re not sure how much sideways action will actually be possible in this new CLA45 AMG. You see, its four wheel drive system is one that only sends up to fifty percent of the engines power to the rear wheels, and that’s only when the fronts begin to slip, so chances are, this AMG will just grip and go rather than, cock about with destroying its tyres, then griping a little, but then letting go again, before finally gripping and going, which is hilariously entertaining, but not particularly quick. That said, I have faith in those AMG madmen to tune in some nice, enjoyable oversteer into the CLA45’s chassis by adding in specifically tuned springs and dampers as well as stronger bearings at each end. 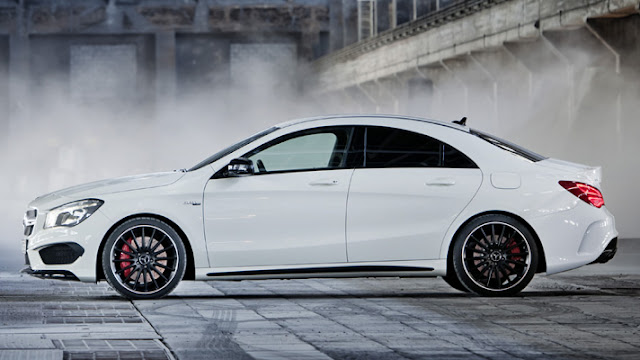 There’s the typical AMG styling tweaks as well. You get a lairy body kit with a carbon fiber lip at the front, another on the boot with tasteful ‘Turbo AMG’ badging, a sharp rear diffuser housing quad exhausts which will spit out some very unique four cylinder turbo noises and 18″ alloys. Inside there’s racier leather seats, lots of polished stainless steel and carbon fiber trim, a stumpy gear lever embossed in the AMG logo, and crucially, a lap timer, for showing off to your mates. 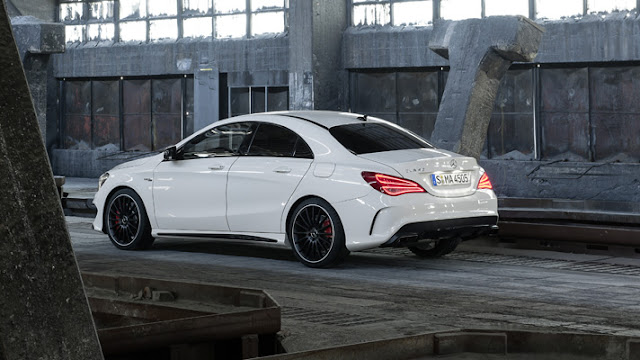 Pricing has yet to be announced but it shouldn’t be too much more than its £36,000 A45 AMG brother, which is a hell of a lot less than its other, bigger brother, the CLS63 AMG, and one hell of a performance bargain if you ask us!

What do you think Carhooters? Will you welcome this new gripy breed of AMG with open arms on performance alone? Or should all AMG’s wag their tails in a flurry of tortured tyres and screaming V8 engines? Tweet us @carhootsUK or add a comment below.