The new Subaru WRX concept revealed, following its debut at the New York show. Is Subaru back to its best? Read more to find out about the brand spanking new which promises to be the fastest ever

It’s getting ever harder these days to place Subaru drivers into a particular stereotype, it used to be simple, Subaru’s were driven by people whose exhaust pipes were bigger than their heads and their egos smaller than a toddlers training shoe. But more recently there has been a trend for much older, less chavy individuals to buy a top shelf Impreza for some mid-life thrills in between playing golf and wearing stripy trousers. So, with the blue rinsed brigade taking over, Subaru needed to pull out all the stops to ensure that the chavs were most definitely not coming back.

So then, the new WRX Concept! A separate model from the Impreza – which if I’m honest is going a little soft these days – is supposed to be the perfect car for some council estate cruising and doing what is called ‘mainys’ – roughly translated, by a chav, driving up and down the main street checkin’ out what’s goin’ on, shouting at pretty girls, etc. Expected to be shown in production form at this years LA Motor Show it shows the future for Subaru and boy does it need to be special in order to live up to the whole image of bright blue WRX’s with golden wheels flying sideways through the countryside that we’ve all come to expect from Subaru. And well, it certainly looks the part, or does it? 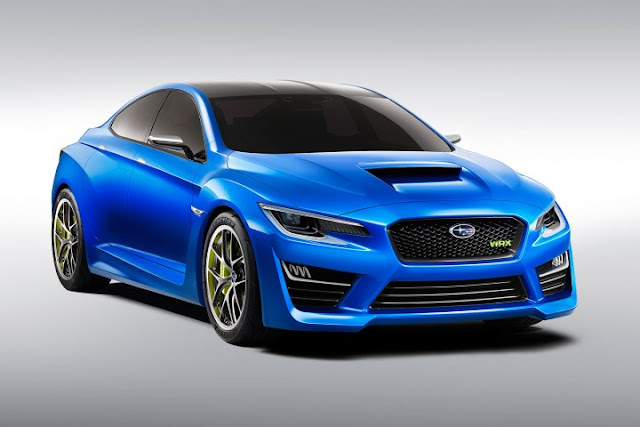 You see, Impreza WRX’s of old looked like they were designed by a 10 year old during detention with a set of Crayola’s. But for this new WRX, Subaru have clearly decided to stop borrowing the artistic talents of pre-pubescents, instead opting for some rather crafty pencil – rather than crayon – enthusiasts. This, I feel has been a smart move.

Style wise this WRX Concept is much more conventional than the Imprezas that went before it. You can see influences from many a good cars in this new WRX, especially at the front. The grill is not too dissimilar to the Jaguar XFR’s and I’m seeing some Audi S3 in those headlights. Of course there’s a whacking great bonnet scoop too! You know those cars on Grand Theft Auto that look like a mish mash of many different real life cars but you become accustomed to the GTA variant? This is like that, but more er, real, and it really does work, somehow.

Around the sides it has flush door handles (probably unlikely to make production) like a Tesla Model S and the side as a whole reminds me of most BMWs these days, particularly the way the windows kind of roll in towards the roof with a nice chunky character line down the doors. Flared wheel arches are most definitely in play here as well. 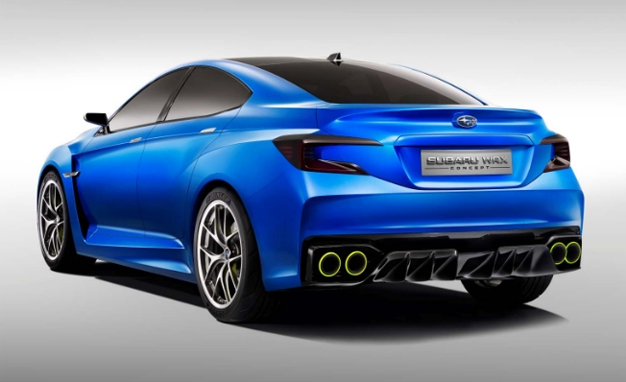 The back is what could cause the most controversy among the boy racers of Britain, though. Like the current WRX STI that we get, this new WRX no longer has a questionably purposeful spoiler large enough to intimidate your mates and Toyota Prius’ with. Whose got the biggest spoiler to compensate for er, something else, really was the name of the game. However, this new Scooby only gets a small and pathetic lip spoiler and a massive (probably of the fake Halfords variety) diffuser below. Then there are the tailpipes. Because they’re difficult to spot by their sheer size and number alone, Subaru has helpfully given them lime green accenting around the lip of each pipe to ensure you don’t miscount them, or something…

And if giving the ol’ brain a workout isn’t your thing, you probably shouldn’t be driving something like this. It’s expected to have a turbocharged version of the 2.0liter boxer engine that’s found in the Toybaru GTRZ thing and produce something like 300hp. For the rest of us though, this really could be a Subaru that us petrol heads can buy into without feeling like a bit of a cock or an antisocial spikey haired youth. For starters, there’s no Anti Social Behavior Order spoiler, or chav inspired cherry bombs on this new WRX, I can’t even see any crash damage from previous owners, and there’s no signs of general aftermarket molestation! 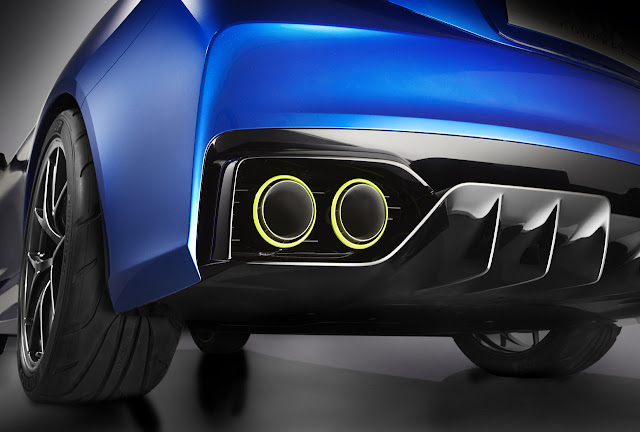 While Subaru may have moved the game on ever so slightly from the road going rally machines of old, this new WRX concept certainly shows promise from a brand that many considered struggling over these past few years. Lunacy has been restored to one of Japans most loved brands. There is just one thing that Subaru need to do before we’re sold on this new flavor of WRX, don’t mess up the interior with some tacky, sub Korean grading of plastic. Get that spot on and you’re onto a winner with this one, Scooby!

What do you think about Subaru’s new approach to the WRX brand? Should they have ditched their ‘rally car for the road’ styling in favor of this new street look? Join the discussion on Twitter @CarHootsUK or leave a comment below.