To celebrate Lamborghini’s 50th anniversary we get up close and personal with the Miura – the world’s first ever supercar.

Yesterday I found myself in the presence of four Lamborghini Miuras. FOUR Miuras. I never thought I’d ever see one in my life let alone four in one place, they’re just so rare. For those that don’t know, the Lamborghini Miura is the car that set the supercar model for future generations. These days there are many mid-engine supercars on sale – the Ferrari 458, McLaren 12C, Lambo’s Gallardo and more. But before the Miura came along in 1966 mid-engine road cars simply didn’t exist. Only racecars like the Ford GT40 had their engine sat between the front and rear axles. But this stunning Lamborghini was different, its creators decided to stick the engine in the middle, and so the supercar as we know it today was born. The Miura was the world’s first supercar.

So, you could imagine how giddy I felt standing next to one of these gorgeous machines. The shape is just completely breathtaking. Unlike modern Lamborghinis, the lines are smooth and the car is pretty in a classical sort of way, but even today the Miura looks unbelievably modern. I can’t even begin to imagine what it must’ve been like to see one of these cars drive past you back in 1966, I can only imagine it being like having an alien spaceship land in your backyard, it would’ve looked so out-of-this-world cool.

This is probably going to sound quite weird, but the Muira has a very cute kind of face. You look at the headlights with those eyelash-like strakes and the soft edges of the front wheel arches and it’s like looking at a little puppy that knows its done something wrong but is doing its best to try and look innocent. You just can’t help but love the car. 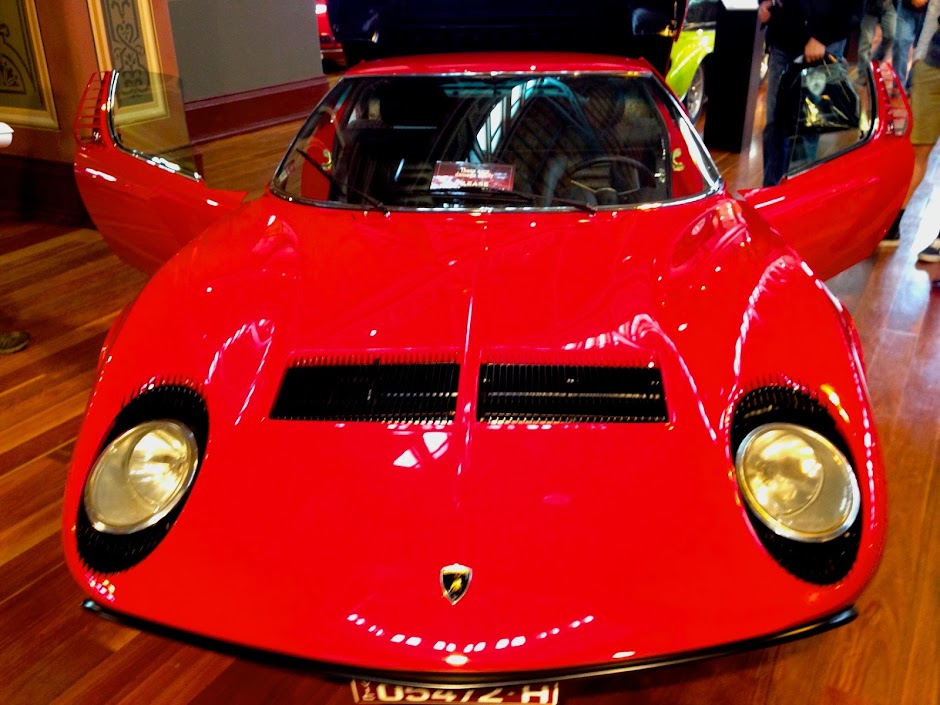 It’s such a small and low car as well. You crouch down beside it and providing you’re moderately sized you’ll still be taller than it. In terms of length it’s probably not much longer than a current generation Mazda MX-5 but it’s so damn wide. The fact that the body is probably a little bit wider than the chassis exaggerates the width, but how typically Italian is that!? They designed the chassis for the car first and showed it at the 1965 Turin Motor Show then were flooded with offers from people A) wanting to buy the car and B) designers wanting to mold their sheet metal around the Miura’s unique frame. Marcello Gandini from Bertone was chosen to design the car and the body that he came up with was slightly too wide but rather than start all over again they decided to leave it. Italians – you’ve got to love them. 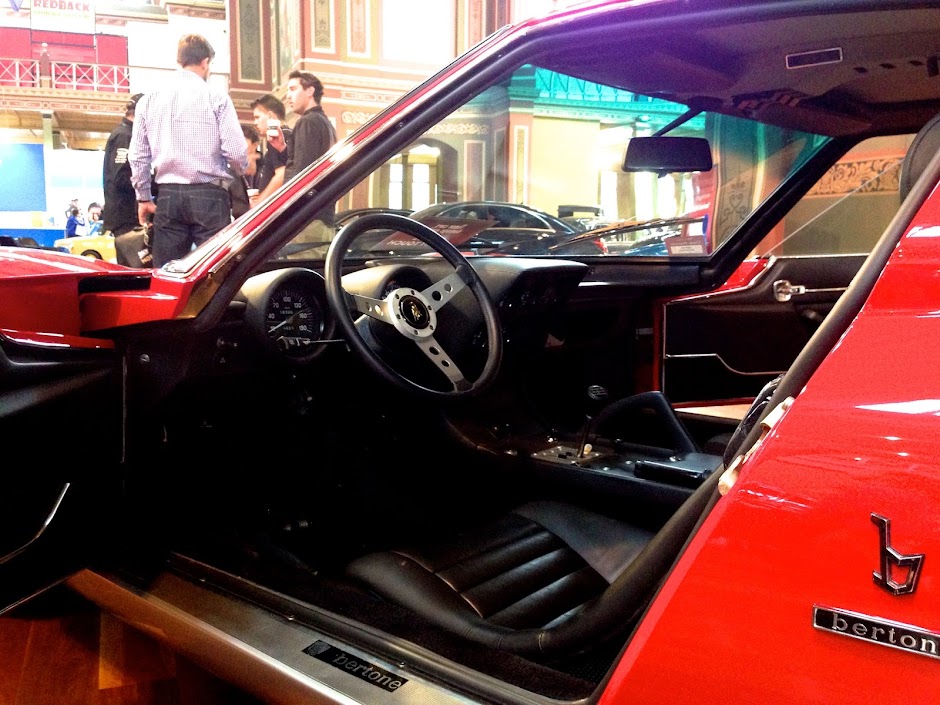 One of the design cues that I love the most about the Miura, other than the frankly amazing wing-like body shape, are the doors. They’re deliberately shaped like bull horns, and the dainty chrome door handles are hidden in between all of the chrome strakes. Another really cool thing is the small air intake just ahead of each of the rear wheels – it’s not massive and showy like an Aventador intake but subtle and cool.

Anyway, after a chap from Lamborghini noticed that I’d been dribbling over his stunning car for quite some time he decided to let me have a bit of a poke around it. Oh dear god. He lifted the engine cover and revealed the unique transversely mounted 3.9liter V12 engine that famously has a tendency to spit unburnt fuel from its carburetors onto the hot engine causing the entire car to self combust. Fantastic. 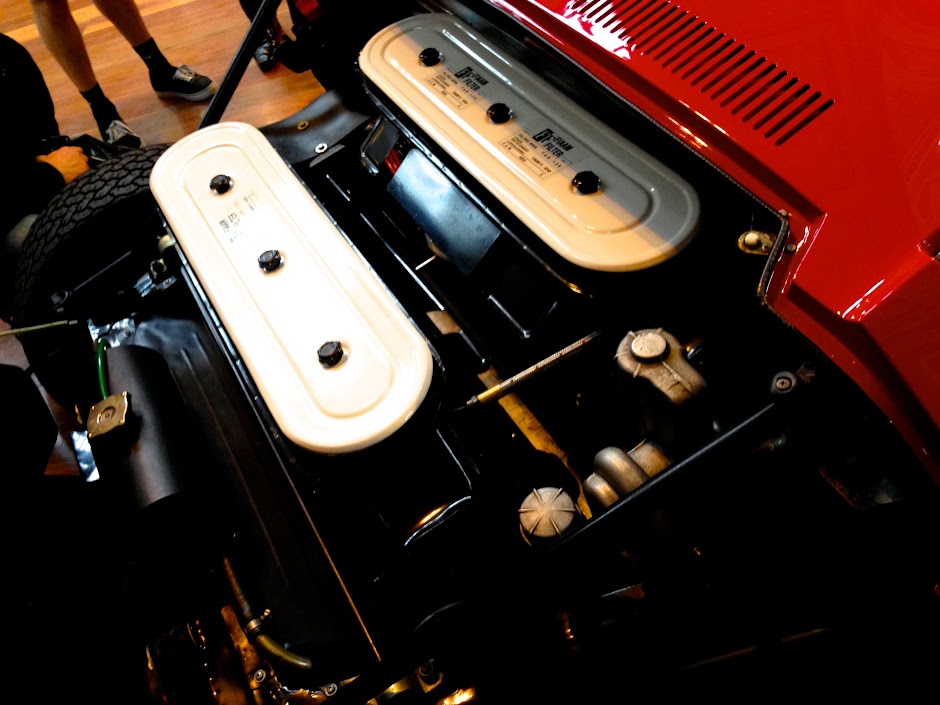 It’s not a particularly pretty engine bay, all you see is the black steel frame, the vintage tyres, and the all-black engine. But it’s special. The V12 engine of this example has moved the car just 18,000 miles since it was built. That old 3.9liter V12 produced 350hp back in 1966 and the car could hit 62mph in seven seconds and do around 170mph flat out. The performance must’ve been seen as completely insane when the car was originally launched at a time when most humble cars could barely do 70mph.

Then guess what happened!? I was allowed to sit inside the car! Normally I wouldn’t get excited about simply sitting in a car, because I like driving them, but the Miura isn’t just any old car.
So, I pull the lovely hidden chrome door handle only to be greeted by black leather and the slight scent of petrol. The Lamborghini chap tells me that the best way to hop inside a Miura is to put your bottom on the seat then worry about folding your legs inside after. So, bum on the seat, then I awkwardly lift my legs over the thick and high sill. 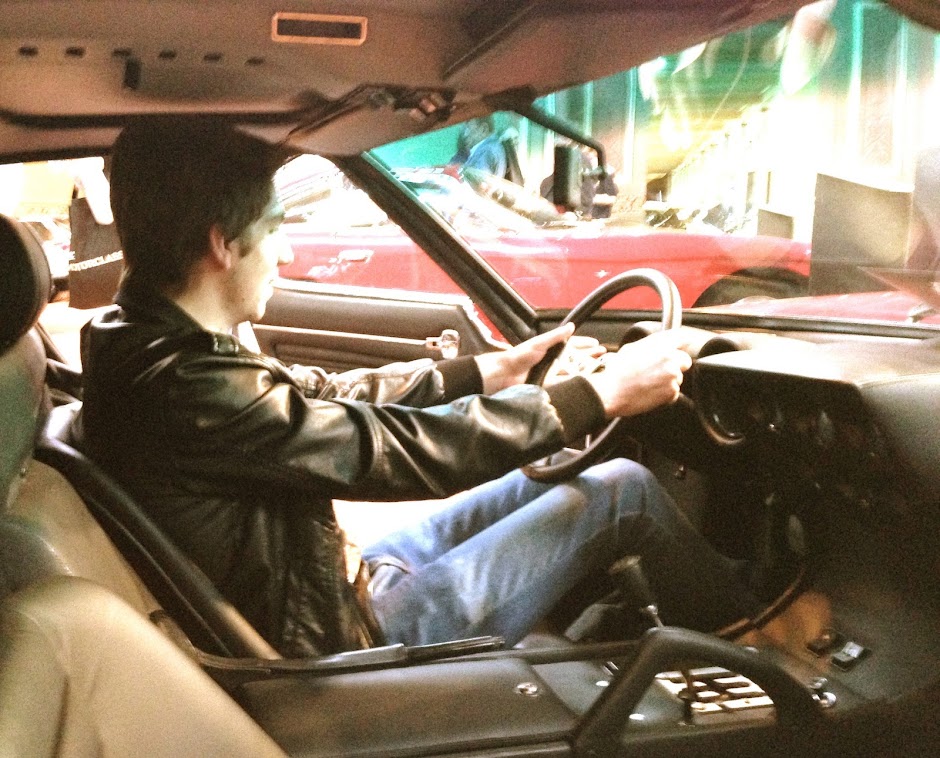 It’s, um, snug. To be fair, the deep bucket seats are surprisingly comfortable with a lot of support, but that’s about where the comfort ends. The steering wheel seems like it’s meters away from my chest and by the time I reach it my arms are stretched out straight. The wheel is also tilted up quite a lot like a van. But that classic leather wrapped Lamborghini steering wheel feels fantastic in my hands. The leather is nice and soft, and the metal spokes cool.
Interestingly, you can’t really see the dials because the steering wheel is in the way. But this really is a minor issue compared to the ergonomic problems with the Miura, the driving position is just hilarious. The steering wheel is too far away from my chest and my knees could probably steer the car more easily than my hands. The pedals are so close together as well. I’ve literally no idea how you drive a Miura. I can only imagine setting off before turning the steering wheel right which then causes your leg to push the accelerator which obviously results in panic and a massive accident, at which point you’d be killed because your knees are the crumple zones. What a fantastic car. I want one. 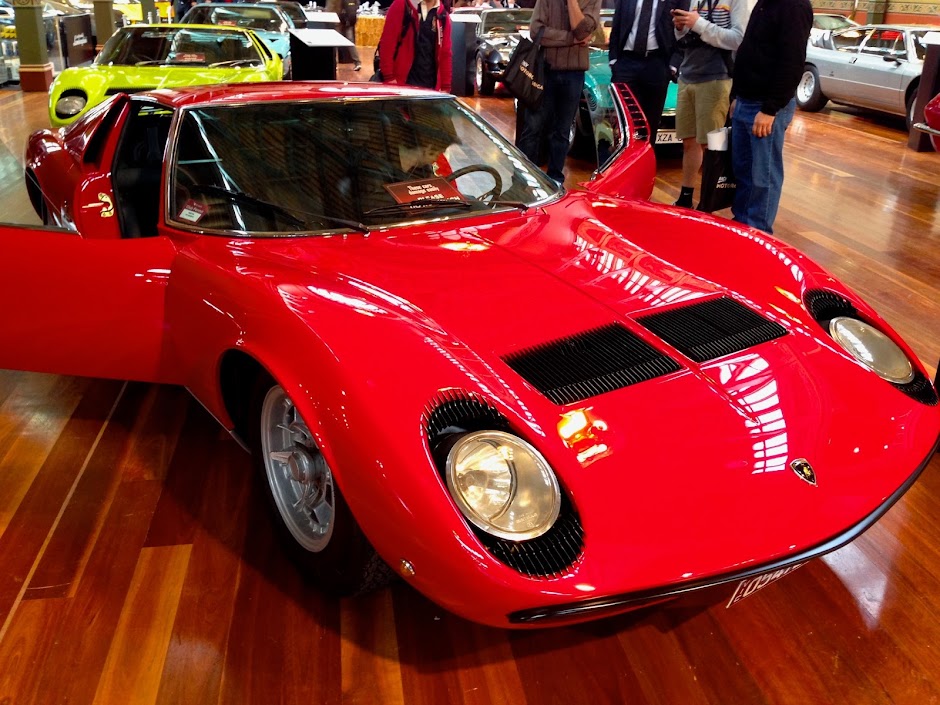 I look in the rear view mirror for some reason, and all I see is the engine wedged up against a piece of thin Perspex. You can’t see anything behind the car (there are no wing mirrors either), but who cares when you can admire that V12 engine? There are funny switches everywhere that seem to be randomly splattered across the dash and centre console as well, and most of them aren’t labeled. The airplane-like ones stuck to the roof are my favorite, for obvious reasons.

I really didn’t want to leave the Miura, partly because it would be quite difficult to physically get out of the car and partly because it is one of those dream cars. I’m just so glad that I got to see one in real life and to have a bit of a poke around one is something that I’m extremely thankful for – thank you Lamborghini man.

After I elegantly got out of the Miura without almost falling over a small five year old boy had a sit in the car. And I just knew that this would be a defining moment in the young boy’s life as a petrol head. What an amazing car. Thank you Lamborghini, for creating The Supercar. Happy birthday.