It’s here! Details on the seventh iteration of the beloved Volkswagen Golf GTI have been released before the cars world debut at the Geneva motor show, and things are looking rosy.

Just like before you get a 2.0 liter turbo four cylinder engine, front wheel drive and a six speed manual gearbox, although a six speed DSG box is also available at an additional cost. You also get the shiny new VW Group MQB platform – a kind of meccano set used by Volkswagen to build millions of different models – and the traditional tartan cloth upholstery that harks way back to the original Golf GTI, plus special go fast bits like a more aggressive body kit, massive alloys, a sports steering wheel and gear shifter as well as stainless steel pedals.

Overall it’s a classy looking thing, and it certainly looks a little more grown up than the Focus ST whose Tangerine Scream paint, central exhausts and plethora of non-functional air vents appeal to the five year old in us all. The Golf however is all about form following function. There aren’t any unnecessary or outlandish styling cues, it’s just all subtle refined class. The same can be said for the GTI’s performance, in standard specification the 2.0 liter TSI turbo engine produces 217hp and 258lb ft of torque. That’s enough to send the GTI’s lithe 1351kg mass to 60mph in 6.5 seconds, which is one tenth quicker than before, and eventually it’ll hit 152mph. So it’s not going to break any land speed records, but it should be plenty quick enough for most people. 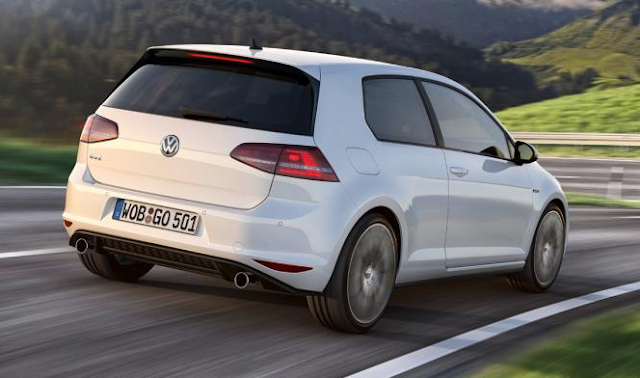 However, there’s more. For the first time Volkswagen is offering a performance package for the GTI – approximately £980 extra over the standard GTI. This package increases the power – obviously – to 227hp, adds a proper mechanical limited slip differential – none of that electronic LSD simulation here – and larger brakes.

These clearly aren’t huge gains in straight-line performance, however the real advantages of the performance package should be made clearer on a race track and through the corners where the mechanical limited slip differential should provide greater traction when accelerating out of corners with reduced torque steer as those many, many torques are deployed through the front wheels in a very controlled, sophisticated and very Golf-like manner. The larger brakes should be less prone to fade during exuberant driving whilst providing greater braking power to enhance the driving experience as well.

Volkswagen reckons that this new GTI should be able to achieve around 47mpg, which aint bad. But what they don’t tell you is that if you plan on actually driving the new GTI, which we’ll assume you do, then you’ll really struggle to achieve that figure, especially if you’re driving enthusiastically.

Prices are expected to start at just under £26,000 and on the 26th of March you’ll be able to get into your now outdated and comparatively useless, disappointing and pointless sixth generation GTI, drive it gingerly down to your local VW dealership and buy this new one which will no doubt be a little bit better than the already brilliant sixth generation GTI in every imaginable way. It’s an evolution.

What do you think of VW latest offering? Please let us know in the comments below or tweet us at @CarhootsUK