Bumblebee goes retro for the new  Transformers 4 movie. The new Camaro in recent films has been replaced as a highly modified 1967 Cheverolet Camaro SS.

In Bay’s string of Transformers movies, Bumblebee’s automotive form has always been a modern fifth generation Camaro, but until now, it has never a first-generation Camaro. 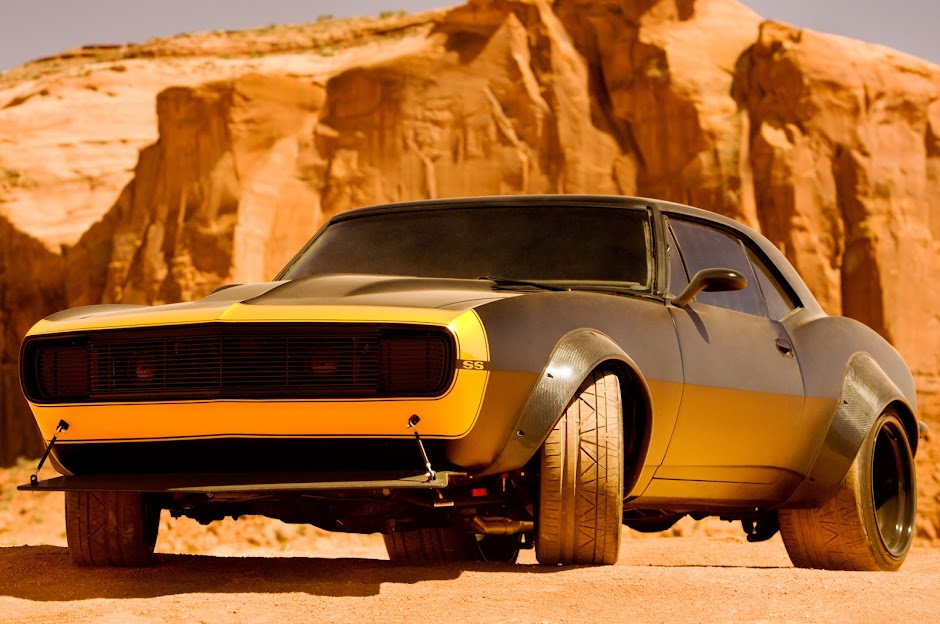 No doubt this modified wide body 1967 Camaro SS will divide people. Camaro purists will hate it, people growing up on the Fast & Furious movies will love it. This car looks like it is built on steroids with shaved bumpers, a massive front splitter, a massive hood and mile wide wheels that are unlike anything Chevrolet produced sixty years ago.

This follows the exciting news we brought you yesterday about three new Autobots which included a fresh new look for Optimus Prime as a custom Western Star, along with a Bugatti Veyron Grand Sport Vitesse and a C7 Chevrolet Corvette Stingray. Micheal Bay is really going for some horsepower with the fastest production car on the planet and some powerful american muscle.

These new editions are in light of Michael Bay wanting to rebot and freshen up the franchise since the Dark Side Of The Moon. In an interview with Forbes he explained,

“We’re going to start off smaller. There’s a brand new cast. To freshen the franchise we’ve redesigned everything from top to bottom. The history of the first three movies is still there, we start four years later and there’s a reason why we’re meeting a new cast,” he told Forbes hinting on a new cast which may include to Mark Wahlberg, T.J. Miller, Jack Reynor and other actors.

Bay hasn’t revealed quite how or why Bumblebee has been transformed into a 1967 Camaro but no doubt it will be one hell of a story if Michael Bay has anything to do with it.

I guess we’ll just have to wait until next summer as Transformers 4 is now filming for a June 29, 2014 release.

IGN bring you the latest Transformers 4 news and gossip:

What do you think of Bumblee’s new look carhooters? A good or bad move for the franchise? Let us know your thoughts by tweeting us @Carhootsapp or leaving a comment below